A Blue day in January 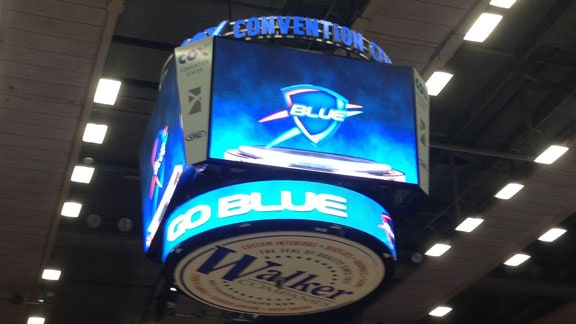 My wife, my senior daughter and I took a trip to Oklahoma City on Saturday.

I’m enjoying going on the these trips – I always have.  But there’s something a little different about these trips this school year because this daughter is a senior.  I know there is a limited supply of these trips while she is still in high school. 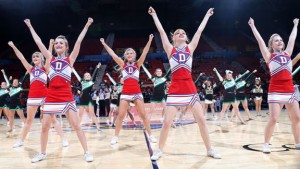 So Jodi and I had the opportunity to watch Jenna dance again in a public setting.  Jenna was one of the captains of the cheerleaders and dance team who travelled from Durant to OKC to participate in a clinic put on by the National Dance Alliance and National Cheerleading Association.

And it was hosted by the OKC Blue.

So the girls, along with girls from other schools in the state, had the opportunity to learn a dance that afternoon and perform it that night between the third and fourth quarters of the Blue’s game with Reno.  (Jenna and the Durant girls did fantastic by the way.)

What in the world does this have to do with sports, Joey?

I’m glad you asked.  Have you had a chance to go to a Blue game?

I hadn’t.  Not this year nor in the previous years of the Oklahoma City Thunder’s D-League affiliate’s previous incarnation as the Tulsa 66ers.

But it was a great night and for basketball fans in the state, it would be worth the time to take in one of these games.

The home of the Blue is the Cox Convention Center (which I still want to call the Myriad) and it’s right across the street from Chesapeake Arena.

The Thunder themselves were out of town, so some of those folks regularly associated with Thunder games came across the street to treat the fans of the Blue through the night.

The Thunder Drummers greeted the fans as they came in the gates and performed at halftime.  The Thunder Girls performed through the game.  The Storm Chasers were in the house.

And the game itself kept the fans’ attention for the full four quarters.  The Blue rallied from an 18-point deficit to win, 130-127, over the Bighorns. 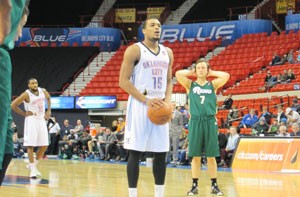 Former standout at local Southern Nazarene had a career night with 30 points and 10 rebounds in the win.

And, of course, my daughter performed as well.  What a night!

I realize that not every Blue game will be comprised of all those factors, but I’m definitely going back.

The event had the feel of Thunder games I’ve attended and the people who handled everything there were classy.

And don’t forget to take the family.  Remember, there is a limited number of trips you get like this with your family as it is right now.  A Blue day could make for a day to remember.  It was for us.