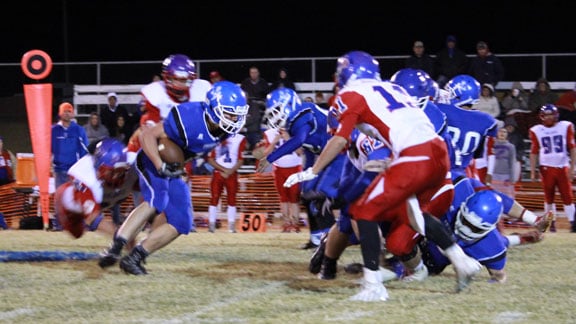 The Crusader offensive line blocks as Spencer Boese avoids the defenders for a gain of 10 yards. Photo credit: Wesley Javorsky.

The Corn Bible Academy football team hosted Sharon-Mutual on Friday night in the first round of the playoffs, and the Crusaders crushed their opponent by a score of 44-26.

CBA rushed for a total of 495 yards, 300 of which were contributed by senior Spencer Boese in his final game at Crusader Park. Boese also finished the game on offense with five touchdowns.

CBA entered the game on a five-game win streak and with a 4-1 home record. Sharon-Mutual struggled all evening stopping CBA’s one-two punch of running back Spencer Boese and full back James Vercellotti. CBA took advantage of Boese’s speed advantage and ran multiple sweep plays to the outside.

Each time the Trojans, who outsized CBA but were slower, committed themselves outside to stop Boese, the 6-foot-1, 210 pound James Vercellotti pounded the ball up the middle of the field. By the end of the first half, CBA led 22-12. The second half followed a similar pattern as the first, and the Crusaders emerged victorious 44-26.

“We had a full team effort and didn’t take plays off,” Boese said. “The big stops on defense sparked our offense and helped us secure the win.”

Although Boese and Vercellotti get most of the credit for CBA’s incredible run game, the Crusaders’ offensive line deserves praise too. Despite being largely outsized by their opponents, the CBA offensive line has been able to consistently create holes for their backfield.

Besides Boese, the other leading rushers for CBA were Vercellotti with 107 yards and a touchdown, quarterback Dylan Schmidt with 48 yards, and Andre Miller with 39 yards. Defensively, senior defensive end Dakota Clayton led the team in tackles with 16, followed by Boese with 15, Schmidt with 14, and Miller with 13.

“I’m really proud and excited for the boys. It’s been since 2008 that we’ve made the quarterfinals,” Coach Todd Smith said. “I’m especially proud of how we persevered after beginning the season on a losing note and with only 12 players. I’m thankful to God for protecting us from injury too.”

CBA will next hit the road to play Pond Creek-Hunter on Friday at 7:30 p.m.