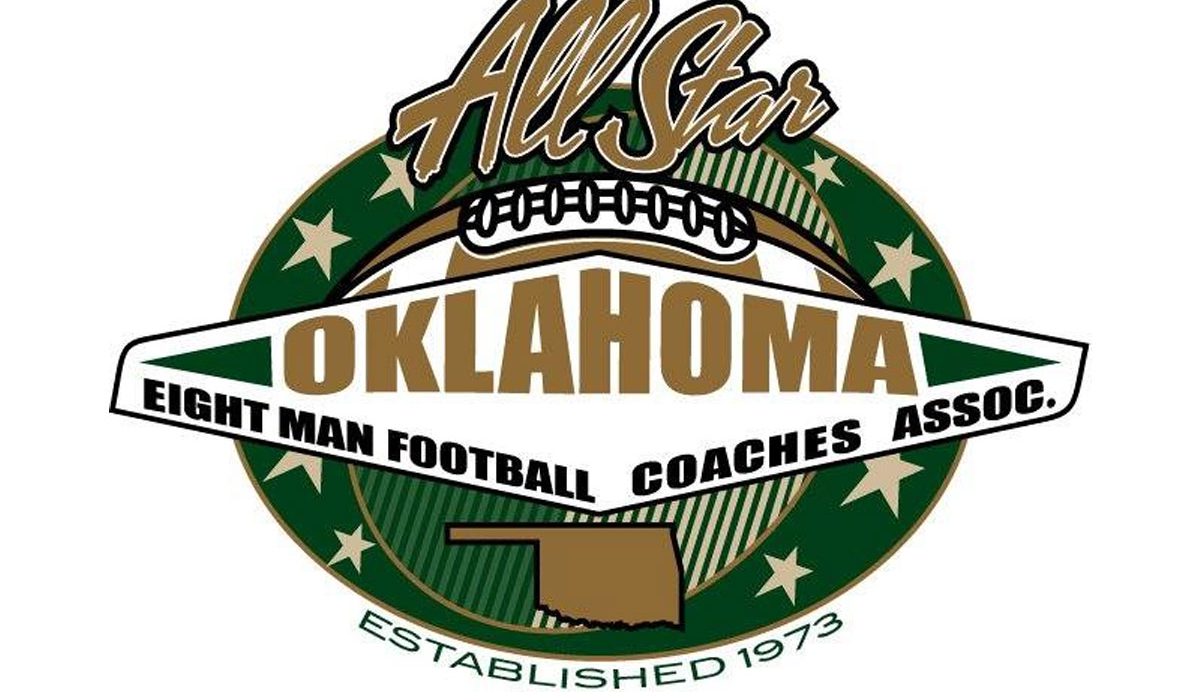 Despite the 14-0 shutout loss last year, the Green team has won six of the last eight post-season classics.

While the Green squad was amassing 265 yards on the ground and 295 yards via the pass, the Gold team generated only 49 yards rushing and 446 yards through the air.

Unable to move the ball on the opening possession, the Gold was victimized by an interception from Green defensive back Riley Williams of Waukomis at the Green 33-yard line.

Lovell concluded the drive with a 9-yard touchdown run with 11:41 left in the first quarter. Hayden Morgan of Midway kicked the point-after to give Green a 7-0 lead.

Defensive back Trey Allen of Laverne intercepted an errant pass from Weleetka quarterback David Dye to set up the Gold offense at the Green’s 34-yard line.

Concluding the nine-play drive, Davenport running back Dalton Nicol burst up the middle for a 3-yard TD run with 10:06 left in the second quarter.

Following an exchange of punts, the Green team marched 45 yards in five plays with time winding down before intermission.

During the drive, Dye connected on a 22-yard pass to wide out Cristian Gomez of Garber before reeling off four runs of 5, 5, 12 and a 1-yard TD run as Green regained the lead for good at the 2:40 juncture. Although the two-point conversion pass failed, the Green team held a 13-8 margin.

With time running out in the second quarter, Dye displayed an accurate arm by connecting with a streaking Overton for an 82-yard touchdown bomb on the first play of the series.

The two-point conversion pass failed with 0:25 showing on the clock as the green team carried a 19-8 cushion to the locker room.

Another one play salvo by the Green team to start the third quarter ignited a high scoring second half.

Corn Bible halfback Spencer Boese broke off right tackle and scored on a 47-yard TD run. Boese added the extra point to provide the Green team with a 27-8 cushion with 11:50 remaining in the third quarter.

Pond Creek-Hunter product, wide out Blake Rayner, caught a 27-yard touchdown pass from Halcomb with 4:57 left in the third quarter. Rayner tacked on the two-point conversion pass for a 27-16 deficit.

With Lovell under center at quarterback, the Green team responded with a 42-yard, three-play drive as time ran down in the third quarter.

Lovell culminated the drive with a 12-yard TD run just before time expired. His conversion run was stopped as the Green team carried a 33-16 advantage into the final 12 minutes.

Six minutes into the fourth quarter Boese scored on a 12-yard run. Although the conversion pass attempt failed, the Green squad held a 39-16 margin.

Over the next four minutes the Gold team unleashed an aerial attack that resulted in a 14-point swing to rally to a 39-32 deficit.

Tyrone quarterback Tanner Hurst found teammate William Slater wide open on a crossing pattern for an 11-yard TD pass with 3:42 left in the game. Hurst hit Laverne’s Tracer Raven for the two-point conversion pass as the Gold team trailed by a 39-24 score.

A successful on-sides kick on the ensuing play was recovered by Turpin’s Alex Jiminez to set the Gold team up at the Green’s 35-yard line.

Halcomb re-entered the game under center and hit Overton in stride for a 35-yard touchdown pass at the 3:12 juncture. The two-point conversion pass from Halcomb to Rayner produced a 39-32 deficit for the Gold team.

Less than a half-a-minute later the Green squad answered with a 50-yard TD bomb from Lovell to Wetumka’s Jonathan Winn. Boese added the conversion run with 3:02 showing on the clock for a 49-32 Green lead.

The scoring barrage wasn’t finished as the Gold team drove 33 yards in four plays before Hurst hit Tyrone’s Joshua Chirchir for a 22-yard touchdown pass in the corner of the end zone.

Hurst tossed the two-point conversion pass to another Tyrone teammate William Slater to create a 47-40 deficit with 1:49 left in the game.

Five plays and 65 yards later the Green team finally brought the curtain down on the all-star game as Boese rambled for a 26-yard touchdown run. The conversion run was stopped with 0:42 seconds remaining in the three and one-half hour game.

Boese led all rushers with 123 yards on 10 carries for the Green ground game. Dye contributed 49 yards on eight carries while Lovell added 36 yards on nine attempts.

Leading the Green receiving corps was Overton with two catches for 134 yards and Corey Miller with three receptions for 45 yards.

Overton finished with seven receptions for 133 yards to lead the Gold receivers while Rayner made four catches for 81 yards and Slater had four for 79 yards.