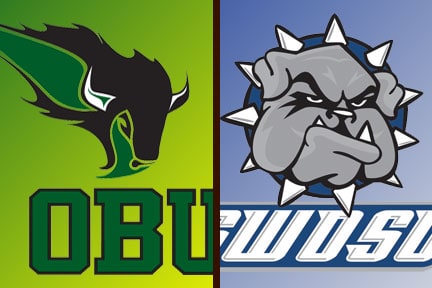 WEATHERFORD – Marc Evans heaved a pass to the end zone on the final play of the game and Collin Bricker outmuscled multiple Oklahoma Baptist defenders for the game-winning walkoff touchdown as SWOSU defeated the Bison 37-35 on Thursday evening at ASAP Energy Field.

The touchdown capped off a wild sequence of plays in the final minutes to end the game. SWOSU took a 31-28 lead with a 32-yard field goal from Tyler Peterson with 7:49 to play and the Bulldogs defense held OBU on fourth down to get the ball back with 4:50 to play. After one first down, the Dawgs were poised to get another first down and continue running out the clock before a false start penalty turned a third and one into a third and six. SWOSU’s third down play was unsuccessful and an 11-yard quick punt by Marc Evans setup Oklahoma Baptist with the ball and 2:05 to play.

The Bison needed 10 plays to move down the field, converting on two third downs before scoring on a seven-yard touchdown pass with 15 seconds remaining to take a 35-31 lead, just their second of the game. On the ensuing kickoff, an OBU squib kick was picked up Bricker and returned 23 yards to get the Dawgs to near midfield. An unsportsmanlike penalty on the Bison moved the ball to the OBU 36, giving the Dawgs good field position and 10 seconds on the clock, enough time for two plays.

A false start penalty moved the Bulldogs back to the 41-yard line and an incomplete pass left SWOSU with one last chance. Evans took the snap on second and 15 and avoided pressure from the Bison by rolling to his right to setup the pass. The heave left his hand and headed towards a swarm of players in the end zone, but it was the Bulldogs senior tight end from Piedmont who went up and wrestled the ball away from all the others to win the game.

“It was a good play call, we had the Hail Mary formation in,” Bricker said. “I started tracking it at the five then I looked back and noticed that everybody was behind me so I just went up and tried to high point and it landed in my hands and I came down with it.

“Once it hit my hands, everybody from OBU was trying to knock it out but I put it in my chest and hit the ground as soon as I could. Once I heard them say ‘touchdown’ I knew it was over after that.”

The teams went back-and-forth all night with neither team leading by more than seven points in the game. SWOSU scored first on a touchdown pass from Evans to Derrick Styles in the first quarter, but the Bison responded with a touchdown run that left the game tied at 7-7 after one.

Each team scored two touchdowns in the second quarter, SWOSU getting a four-yard plunge from Karltrell Henderson and a 19-yard touchdown from Evans to Styles with 33 seconds left before halftime that sent the game to the break tied at 21-all.

Henderson scored the only points of the third quarter on a two-yard run that made it 28-21 with 2:53 to play in the third, but again the Bison had an answer and tied the game at 28-all on a seven yard touchdown pass early in the fourth. SWOSU’s next drive ended in the Peterson field goal, which then set up the late-game flurry which ended in a Bulldog victory.

“When you get into a late-game situation like that where you need to make a play to win a ball game, it’s nice to be able to go to your senior leaders,” SWOSU Head Coach Dan Cocannouer said. “Our kids never quit tonight, even when things didn’t look great with 15 seconds to play, but Collin Bricker made a heads up play on the kickoff and then an even bigger play to come down with the touchdown pass in the end zone.

“I’m so proud of this team, all our players and all our coaches. They continued to fight and deserve this win.”

Marc Evans helped the Bulldogs to 510 yards of total offense by completing 27-of-46 passes for 362 yards with three touchdowns and one interception, saving his longest completion of the night for his last one. He completed passes to seven different receivers, finding JR Omigie and D.J. Jones for six apiece.

Derrick Styles had two touchdowns among his five receptions for 72 yards and Collin Bricker caught three passes for 76 yards, including the game-winning touchdown.

Karltrell Henderson carried the ball 20 times for 63 yards and two touchdowns, but four different ball carriers had more than 20 yards rushing and helped the Dawgs to 148 yards on 34 rushing attempts.

Deric Robertson and Conner Bays led the Bulldogs defense with 12 tackles apiece and Robertson added his third interception of the year. Michael Adefolarin had three tackles for loss and a forced fumble as part of his seven tackle effort and Colton Wright added six tackles, with two tackles for loss.

The victory is the fourth straight for the Bulldogs, who have overcome a winless September and evened their record at 4-4 with three games to play. Next up for SWOSU is a meeting with current league-leader Harding, who is 8-0 following a 35-7 victory over East Central on Thursday evening.