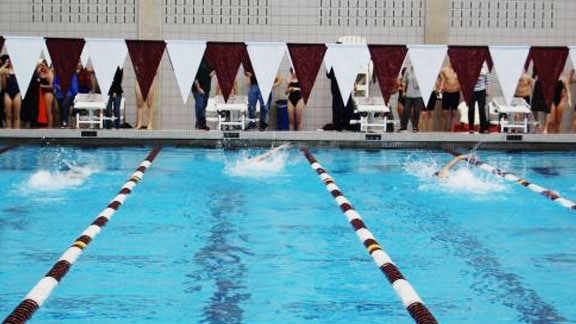 Broken Arrow established last year that the Tigers can be a force in swimming. Breaking numerous relay records last year, the girls’ squad seems poised to chase after many other records, and a state championship, this season.

One of the members of the record-breaking relay team last year, junior Abby Meador, is enthusiastic about the potential of an unprecedented season in Broken Arrow swim’s history and recognizes the importance of encouragement and competition within the team.

“We cheer on all of our teammates at meets and push each other further in practice every day because we’re always competing against each other so we can be strong as a team when meet season comes,” Meador said.

Head Coach Samantha Evans also prioritizes a strong team atmosphere in and out of the pool. In her second season as head coach, Evans already promotes each swimmer to push each other in order for each individual to improve in every aspect of the sport.

“Creating a good team atmosphere is everything in swimming,” Evans said. “Since swimming is such an individualized sport, we try to make sure the team is supportive of each other in everything they do. Each of our swimmers encourages and cheers for each other during practices, in races, and other activities outside of swimming.”

The boys’ team is also looking for a breakout season, with a mix of experienced juniors and seniors, as well as motivated freshmen and sophomores looking to add a spark to ignite the team.

Sophomore swimmer Dennis Angelov is prepared to contribute to the team in a big way.

“I’m just training and doing the sets that the coaches give so I’m ready for the meets,” Angelov said.

After an immensely successful season last year, Broken Arrow knows that this season could be special for Tiger swimming. Star swimmer Annie Kramer, a promising sophomore, as well as senior swimmer Bailey Hill and junior swimmer Devin Davis, are all focused on the preparation of the upcoming season, ready to bring home some hardware.

“The swimmers last year wanted to be better and realized that they are capable of being one of the best teams in the state,” Evans said.

Both the boys and girls teams will begin the season with the annual Black and Gold Preview on Oct. 11.

This article was originally published on BAHSPulse.com and is reposted with permission.