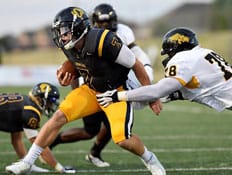 The Central offense was limited in total rushing yards, but picked up three touchdowns on the ground anyway in Saturday’s victory over Northeastern State.

The 2014 President’s Cup battle went to UCO, 28-7, and stopped a four-game slide for the Bronchos in the series.

UCO coach Nick Bobeck said the victory, which moved his team now to 7-2 on the year, was fitting to close the eventful week.

“It was a great end to a really good week here at UCO,” Bobeck said.  “Being able to win that game as a culmination to Homecoming Week was very special.

“We’re obviously excited.  Any time you beat NSU is always a good thing.  And when you play for a trophy is obviously a big deal and we’re very excited to have it back at home.”

The Bronchos were held to just 110 rushing yards on the day, but made up for it through the air.  Chas Stallard completed 75 percent of his passes and threw for 268 yards and a touchdown.

“We’re a very firm believer in being able to work with what the defense gives you,” Bobeck said.  “We’re not going to try to run a square peg in a round hole. That’s not what we do.

“They loaded the box and play a lot of man defense and brought a lot of pressure to make us throw the football.  And we were able to do that.  Chas adjusted very well.

“They gave us a passing game, so that’s what we took.”

And while Bobeck recognized the RiverHawks’ defensive strategy, he also mentioned the part his team played.

“They played a lot of people around the box, but we did have some success running the football.

“The biggest thing we did is that we shot ourselves in the foot on some early drives.  Penalties, getting behind the chains, really hurt us.  We had a couple of third and shorts that we got penalties on that we didn’t pick up the first down.  We have to clean some of that stuff up.  But that had a little to do with the rushing statistic.”

With the Northeastern State game in the rearview mirror and the big season finale against a ranked Pittsburg State team, Bobeck must turn his focus now to Lindenwood for a road trip against a team that has struggled this season.

“You have to be focused because it’s a long road game, too,” Bobeck said.  “It’s kind of trapped in between two big games.  You have some things working against you.  You come off a homecoming game, a rivalry game, where you win a trophy and everybody is excited about that.

“And then you have a quick turnaround for the longest road trip of the season to St. Charles, Mo., and a football team where their record is not that great, but they’ve won a bunch of games in the past.  Two years ago, they won a bowl game.”

Kickoff for Central’s final road game is 1:30 p.m. at Lindenwood on Saturday.