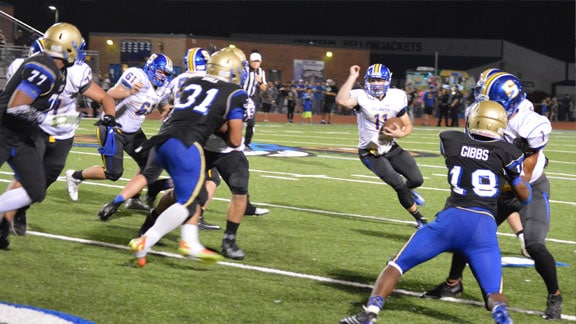 Brownlee ran for three touchdowns in a 30-27 Class 6A-II District 2 victory at Choctaw.

Although Brownlee was the primary ball carrier from the start and scored all but one of the Stillwater (3-4 overall, 2-1 in Class 6A 2 District 2) touchdowns, he said he couldn’t take the credit for the performance.

“I thought I did pretty well but I dedicate this win to our offensive line,” he said. “Our line killed it tonight and that was the only reason I was able to pick up yards.”

The young offensive linemen have struggled at times in previous games, but Brownlee said their performance against the Yellow Jackets gave him the confidence he needed to perform well.

“It felt great,” he said. “They don’t play like that too often but when they do it’s a lot of fun.”

The line opened holes from the first snap and helped Stillwater outgain Choctaw 198-41 at halftime.

Brownlee’s three touchdowns gave the Pioneers a 23-0 lead at half. He said that was the most rushing touchdowns he can remember scoring at any point in his football career.

The Pioneers looked to have all the momentum until Choctaw scored on a five-yard touchdown run from quarterback Braydn Hunt to cut the lead to 23-7.

Neither team was able to score again until a 24-yard touchdown pass from Choctaw backup quarterback Dylan Weaver to Ethan Crews cut the Stillwater lead to 23-13 with 5:13 left.

The Pioneers wouldn’t take long to respond. Jordan Brown scored on a 33-yard reverse with 2:04 remaining with 2:07 remaining to extend the Stillwater lead to 30-13.

Brown dove for the goal line to avoid the final Choctaw defender and was injured on the play, but Stillwater Coach Tucker Barnard said it wasn’t serious.

Although the injury wasn’t serious, things would get serious for the Pioneers following the touchdown.

After a one-yard touchdown from Hunt to cut the lead to 30-19 with 19 seconds left, Choctaw recovered the ensuing onside kick on the Stillwater 40.

The Yellow Jackets scored on the next play with a 40-yard touchdown pass from Hunt to Crews and converted the two-point conversion to cut the lead to 30-27.

“Definitely did (get nervous),” Barnard said. “You sure don’t expect to give up a deep ball right there after that onside kick. We have to play those balls better.”

With the toughest portion of the district schedule done, Brownlee said the Pioneers feel good about the position they are in after the early-season struggles.

Barnard said Stillwater should feel good about the win against the Yellow Jackets and the position it is in, but said now isn’t the time to relax.