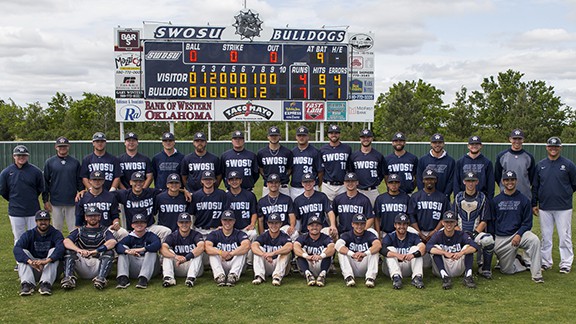 WEATHERFORD, Okla. – On Sunday afternoon at the SWOSU Athletic Complex, the Bulldog Baseball team overcame a 3-0 deficit and scored three runs in the seventh and eighth victories to earn a 7-4 victory over Northwestern Oklahoma State, completing a three-game rivalry sweep in the process.

Moments after the game, Southern Arkansas defeated Arkansas-Monticello 10-6 in the first game of their three-game rivalry set, assuring SWOSU of at least a share of the 2016 Great American Conference Championship. The conference championship is the first for the SWOSU Baseball program of the NCAA Division II era and their first overall since Larry Geurkink led the Dawgs to the 1992 Oklahoma Intercollegiate Conference title.

SWOSU finishes the regular season with a record of 33-13, tying for the program’s most wins of the NCAA era, and at 22-8 in GAC play the worst they can do is a share of the conference title with Arkansas-Monticello.

To get to that point, SWOSU had to work through some adversity in the early innings and overcome the Rangers as SWOSU’s arch rival looked to play spoiler. Northwestern plated one run in the second and got a two-run single in the third to take a 3-0 lead after three innings of play. SWOSU had a chance to get going when they loaded the bases in the fourth, but back-to-back strikeouts ended the threat with all three still on.

SWOSU would again load the bags in the fifth inning, but they would not settle for a similar fate with Cole Wagner coming through with an RBI single for the first run. Jacob Spring then drew a bases-loaded walk and Zach Barton singled through the left side to tie the game at 3-3. Joel Baxley followed that up with a sacrifice fly to score Wagner and give SWOSU their first lead at 4-3.

Northwestern would not go quietly, again tying the game with a two-out single in the seventh inning that evened the score at 4-4. SWOSU had another quick response, taking the lead back on a bases-loaded fielder’s choice from Barton that allowed Tanner Dearman to score the go-ahead run. Blake Gooden came on for starter Gunnar Cook in the eighth inning and worked a quick frame, highlighted by two strikeouts.

While it might not have been needed, the SWOSU offense added two insurance runs in the bottom of the eighth inning. Dearman recorded an RBI on a fielder’s choice and CJ Faddis scored on a wild pitch, giving Bulldog closer Quinton Dougherty some added space to work the ninth. Dougherty allowed one hit, but SWOSU turned a double play to end the inning, the game and the series all in the favor of the home team.

Dearman and Barton finished with two hits apiece while Dearman and Faddis both scored twice in the game. Barton had two RBI while Dearman, Wagner, Spring and Baxley accounted for the others in the effort, which saw SWOSU score seven runs on just seven hits.

Cook (9-3) earned the victory after striking out five in 7.0 innings of work while allowing four runs – three earned – on seven hits. Gooden and Dougherty both faced the minimum in the final two innings, with Dougherty earning his seventh save of the year in the process.

“I couldn’t be more proud of our guys for their effort, not only today, but throughout the entire season,” SWOSU’s Zack Saunders said after clinching his first conference championship as a head coach. “This has been a gritty and tough group all season long. They went about their business this weekend just like we tried to do each week and we got the result we needed.”

With a final regular season record of 33-13, SWOSU ties the NCAA era record for single-season wins and they will wait until Monday to learn their next opponent. The first round of the GAC Tournament will be played on campus sites, meaning the Bulldogs will host a best-of-three series at the Athletic Complex next weekend. Times and dates of those games will be announced later this week.