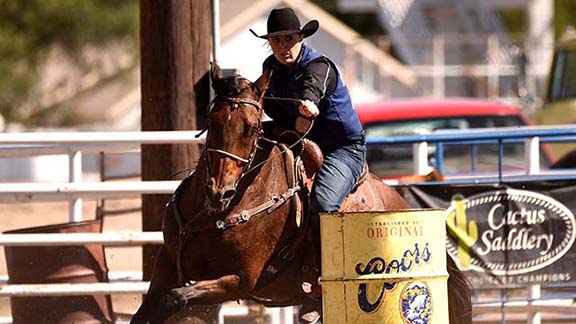 Setting the Scene
– The second rodeo on the Central Plains Region schedule is this weekend and SWOSU will compete at the Southeastern Oklahoma State Rodeo in Durant on Thursday-Saturday, October 6-8
– SWOSU finished third at their first fall rodeo, Colby CC, on the men’s side while the women’s team took sixth at the opening rodeo
– This will be the first trip for the Bulldogs to Durant since April 2014, when the women’s team won the Southeastern Rodeo and the men’s team placed second

The Field
– Each of the ten regular season rodeos will feature competition against members of the Central Plains Region, a group of 18 schools from Kansas and Oklahoma
– All Rodeo events are sanctioned by the National Intercollegiate Rodeo Association (NIRA), which is the rodeo equivalent of the NCAA
– Because of governance under the NIRA, all schools ranging from junior college to NCAA Division I compete against each other

The Coach
– Mike Visnieski is in his sixth season as the head coach at his alma mater in 2015-16
– Coach V has led the Bulldog women’s team to three Central Plains Region championships and two runner-up finishes
– SWOSU has had five team finishes in the top ten at the CNFR and eight individual top ten finishers under the direction of Visnieski
– Competed at SWOSU under legendary coach Dr. Don Mitchell from 1995-99 as a bull rider and team roper

Coach V Preview
“We’ve really been working on our mental game and spending a lot of time in the practice pen as well to prepare for Durant. Everybody’s looking good and excited, it’s the first time we’ve been back to Durant in a couple years so we are all ready to get down there and get after it. I thought Colby was really good, the points and placing of the women’s team might not necessarily reflect how they did as a whole with nine athletes in the short round. Our men did outstanding, they want to get it done again this year, they’re hungry and ready to see what happens.”