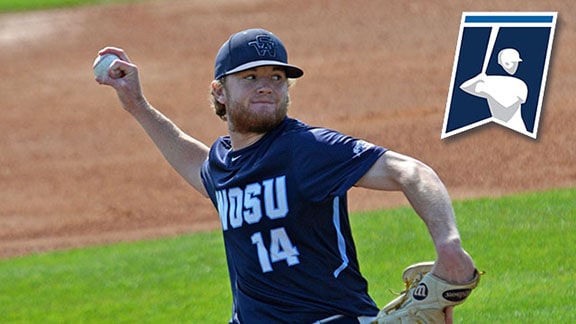 ST. CLOUD, Minn. – A pair of costly SWOSU errors in the first inning led to two runs for No. 9-ranked Central Missouri, who defeated the Bulldogs 3-1 in the opening round of the NCAA Division II Central Regional on Thursday morning at Joe Faber Field.

SWOSU got a stellar outing on the hill from All-Region starting pitcher Jon Chidester, who tossed his fifth complete game of the season, but the Bulldogs played from behind all day and managed their only run of the game in the top of the ninth inning.

Chidester issued a walk to UCM’s leadoff batter, Matt Elliott, in the first inning and the next batter, Dylan Farrell, reached on an error as Joshua Santos lost his footing as he went to field the sacrifice bunt. Chidester got a strikeout of the next batter before a single by Bennett Oliver loaded the bases with one out. UCM’s Derek Cornell grounded a ball to SWOSU’s CJ Faddis at second base, giving the Bulldogs a double-play opportunity but the throw from Faddis to shortstop Haden Houska sailed high of its intended target, allowing two runs to cross for the Mules.

After the runs scored, Chidester settled in to strike out the final two batters of the inning to end the threat with Central Missouri holding an early 2-0 lead. SWOSU had one of their best scoring opportunities of the day in the second as Joel Baxley singled up the middle and Faddis was hit by a Tyler House pitch, but the inning ended with a strikeout and runners on first and second.

The game sped up considerably over the next few innings as both starting pitchers found their groove and settled into the game. Chidester retired 12 straight batters at one point before a issuing a walk to UCM’s Blake Wilfong in the bottom of the fifth. Central Missouri capitalized again, using aggressive base running to score Wilfong from second base on an infield groundout to make it 3-0.

Conversely, SWOSU was held without a hit for five innings before Greg Bruno got a single through the left side to lead off the top of the eighth inning. That forced UCM to make a pitching change and their reliever Lucas Williams got a flyout and a double-play ball to end the Bulldogs threat. SWOSU returned the favor in the bottom of the inning, turning a double play to keep the deficit at 3-0 heading to their last chance at the dish.

Tanner Dearman singled to give SWOSU life in the ninth, moving in to scoring position on a groundout from Korbin Polston. With his team down to their final out, Jacob Spring got a single just past the UCM shortstop that allowed Dearman to score and get the Bulldogs on the board before the game concluded on an infield popup.

SWOSU had more hits (5) than Central Missouri (2) in the game, with the difference in the game coming with three errors committed by the Bulldogs defense. Both teams left four runners on base with UCM being the beneficiary of three walks while SWOSU was awarded no free passes other than one hit by pitch.

“It’s a frustrating way to lose, but that’s what happens when you get to the NCAA Tournament because your mistakes are magnified,” SWOSU Head Coach Zack Saunders said. “Give credit to Central Missouri, they pitched well, put pressure on us with their base running and made some great plays on defense that kept us from ever getting settled in.”

Chidester (8-6) took the tough-luck loss on Thursday despite a stellar performance on the hill. He was named to his second All-Central Region team in two days just after the conclusion of the game, which saw him hold the MIAA Champions to just two hits in 8.0 innings of work. Chidester allowed three runs, but just one was earned and he struck out seven while issuing three walks.

“Jon was really stinking good today,” Saunders said. “If you tell me he’s going to give up two hits, I thought we would win a ball game. Taking care of the baseball was a big emphasis for us coming in to today’s game and it bit us a little bit.”

SWOSU (33-16) must now play each game as if it were there last, needing to win and advance in the double elimination format. Next up for the Bulldogs is a meeting with the loser between No. 3-seed Minnesota-Duluth and No. 6-seed Emporia State, a game that will take place at 8:30 pm on Thursday night. First pitch for SWOSU and their next opponent will be at 1:30 pm on Friday in St. Cloud.

“We have to get past it,” Saunders said when asked of his team’s mindset heading into their next game. “Now we understand it’s the first regional game we’ve ever played in and you saw that at times early in the game. I thought we settled in and played well, so if we can take that same approach into tomorrow’s game I think you have to feel good about where we’re at.”