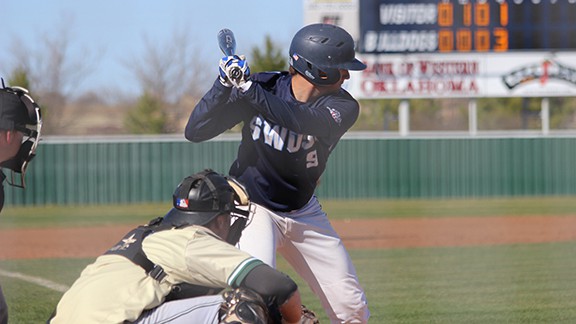 RUSSELLVILLE, Ark. – Although Saturday was an overcast day at Tech Field in Russellville, it sure had the feeling of Spring. That may have just been the presence of SWOSU’s left fielder, Jacob Spring, who set a conference record with three home runs in game one and he hit four home runs for the day to lead the Bulldogs to a doubleheader sweep of Arkansas Tech.

The sweep helps SWOSU keep pace with Arkansas-Monticello atop the Great American Conference standings and it helps the Bulldogs clinch their spot in the GAC Tournament. SWOSU is now 27-12 on the year and 17-7 in league play with two home series remaining. The Bulldogs return to action on Tuesday against Oklahoma City University in Weatherford.

“Going on the road in this conference is extremely tough and for our guys to go get a sweep shows their resolve,” SWOSU Head Coach Zack Saunders said. “Jacob Spring was instrumental today and all four of his home runs came in big situations that really propelled us to get a sweep this weekend. We still have a lot of season ahead of us and we need to finish strong these next two weeks.”

Jacob Spring had a record-setting performance in the opener, finishing 4-for-4 at the plate with three home runs and six RBI as SWOSU earned a rare run-rule victory on Saturday. Spring hit a solo, two run, and three run home run in the contest, marking the first three-home run performance by a Bulldog in the NCAA era (since 1998) and the first by a player in a Great American Conference contest.

Arkansas Tech scored the first two runs of the game in the first inning, but Spring homered to lead off the second inning and Tanner Dearman drew a bases-loaded walk to tie the game at 2-2. Joel Baxley gave the Bulldogs the lead with a two-run single in the third and SWOSU broke the game open in the sixth. Dearman scored on a balk and Spring hit a three-run shot as part of a five-run sixth inning that gave SWOSU a 9-3 lead.

The lineup worked its way back around to Spring in the seventh inning and he sent his third deep fly out to center, scoring Dearman as well to make it 12-3. Greg Bruno doubled and scored on a sacrifice fly from CJ Faddis and Haden Houska hit his first home run of the season in the eighth inning as the lead grew to 14-3, which was enough to end the game by run-rule after eight innings.

While Spring’s game was historic, Dearman also had a nice outing as he finished 3-for-5 with two RBI and two runs scored. Zach Barton and Bruno each had two hits apiece while Baxley had a pair of RBI.

Gunnar Cook (7-3) got the win, allowing seven hits and three runs – one earned – in 7.0 innings of work, while Austin Hilton allowed two hits but pitched a scoreless eighth to close out the game.

SWOSU had to come from behind in the series finale, erasing a 4-1 deficit before going into extra innings where they would earn the victory. The Bulldogs score once in the fourth and fifth innings and twice in the sixth to tie up the game, then got an unearned run in the top of the eighth to take their first and only lead.

Trailing 2-0 in the fourth, SWOSU got on the board and cut the lead in half on a solo home run from Joshua Santos. ATU scored twice in the bottom of the inning to make it 4-1, but the Bulldogs got an RBI single from Dearman that scored Bruno but saw Faddis get gunned out at the plate to end the inning.

The Bulldogs headed to the sixth inning still trailing 4-2 when Polston singled up the middle and came around to score on another towering home run shot from Spring that tied the game up at 4-4. That’s where the score would remain into the extra frame, when Polston singled and moved to second on an error and Spring was intentionally walked by the Wonder Boys. Barton then hit a ball that was misplayed by the ATU shortstop, allowing Polston to score the go-ahead run.

Polston was the lone SWOSU player with two hits in the game and he also scored twice while Spring had two of the four RBI in the contest.

Four different pitchers were used by the Bulldogs, with Devin Ring going 2.1 innings and Ben Schweinfurth covering the next 2.0 innings before giving way to Jeremy Smith. Smith (2-1) earned the win after holding the Wonder Boys to one hit in 2.2 innings and Quinton Dougherty picked up his fifth save of the season after pitching a scoreless eighth inning.