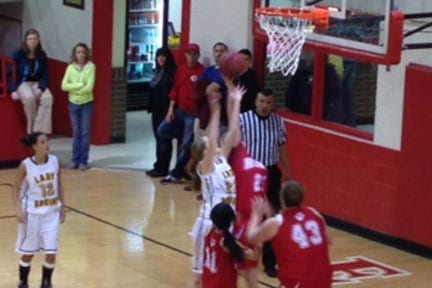 Caddo's Caroline Joines and Howe's Savannah Smallwood going for a rebound in the Class 2A regional consolation game on Friday, Feb. 22, 2103.

The Caddo Lady Bruins had a different gameplan on Friday night against Howe than what they have run this season, but it proved to be effective and kept the season alive.  Caddo kept Howe at bay and held on for a 43-40 win in the regional consolation bracket.

Caddo’s Caroline Joines and Howe’s Savannah Smallwood going for a rebound in the Class 2A regional consolation game on Friday, Feb. 22, 2103.

Caddo, usually a team firing at will from behind the arc, chose to work the ball more inside.  The Lady Bruins made one attempt on the evening, a three-pointer from Chelsey Pilkilton in the third quarter.

The game was knotted at 6-6 at the end of the first period.  Caddo took the lead in the second and didn’t look back.

Howe trailed by eight in the final period, but a pair of three-pointers from freshman Jentry Brown kept the Lady Lions’ chances alive.

Caddo (21-6) made its free throws throughout the game, but especially in the fourth quarter when it really counted. The Lady Bruins were 18-of-23 from the stripe for the contest and an impressive 8-of-9 in the final period.

LuAnn Davis scored 14 points for Howe (19-9) before leaving the game with an injury.

Caddo will face Silo on Saturday at 1:30 p.m.  It will be the third time these teams have met this season.