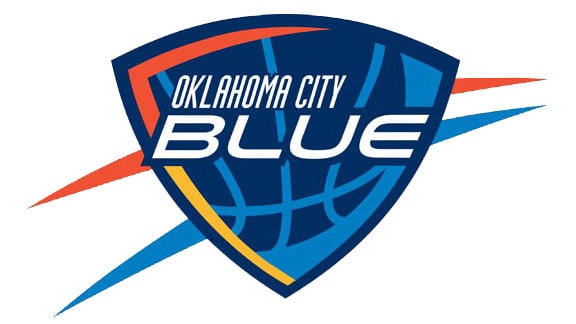 Oklahoma City – The Oklahoma City Blue matched its longest win streak of the season at three with a victory over Reno on Saturday night. 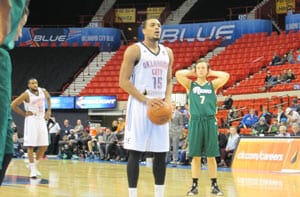 Former Southern Nazarene standout Xavier Alexander led the way with a game-high, and personal career scoring best, 30 points to go with 10 rebounds.  He shot 11-of-17 from the field and 2-of-3 from long range.

Alexander had a big block and got down the court to throw in a monster slam midway through the fourth quarter as part of a 13-4 run to give the Blue a 118-116 lead with 3:47 remaining.

Grant Jerrett and Reggie Williams each had 22 points for the Blue.

OKC played from behind most of the game, as Reno got off to a very hot start on a cold January night.  The Bighorns scored the first eight points and had doubled up the Blue, 30-15, less than nine minutes into the contest.

Reno played at a frenetic pace and substituted players in and out three to five at a time every two minutes, constantly allowing for fresh legs to keep that pace going.  The Bighorns also took many shots from behind the arc, an made 10 of 22 in the first half.

Not surprisingly, all 10 Reno players had at least 13 minutes of court time and seven scored in double figures.

A fierce OKC effort late in the second quarter kept the score within a manageable deficit in the first half and they trailed by only eight at the break.

The Blue simply would not give up.  Each quarter started with a Reno run and each quarter would end with OKC pushing back.

Reno led 112-105 with just less than seven minutes left when OKC made its big push to take the lead, only the second time in the ballgame the Blue had enjoyed an advantage.

Although, the Bighorns seemed to be all about offense, some defense was played, exhibited best by another former Baylor Bear, Quincy Miller.  His nine blocks put him on the cusp of a triple-double to go with nine rebounds and 14 points.

Talib Zanna is averaging a double-double while playing in all 21 games so far this season for the Blue.  He had 14 points and 14 rebounds coming off the bench on Saturday.

Maurice Sutton also had 10 points and most coming on ferocious dunks.

The Blue next play on Tuesday, Jan. 13, in the third game of a five-game home stand as OKC hosts the Los Angeles D-Fenders at 7 p.m.