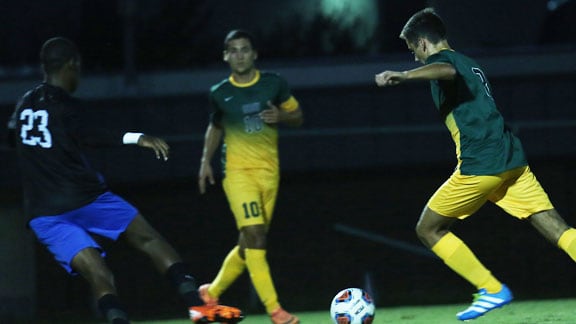 SHAWNEE – Vicente and Alejandro Castillo never got the opportunity to play on the same soccer team. That all changed this year, however, when they both came to OBU this fall. Vicente, a senior, has attended OBU for three years and Alejandro is in his first year.

Since his home is in Spain, Vicente said he wasn’t sure if he would be able to attend college in the U.S. when he first looked into it.

“To get here an international student has to pass the SAT or ACT. In addition, they have to pass an English exam.” Vicente said. “I passed my SAT but I didn’t pass my English exam.”

Things changed however when Vicente got an offer from the OBU coaches about playing soccer.

“I talked with the soccer coach and he offered me a scholarship,” Vicente said.

Once he arrived at OBU, Vicente said he noticed a lot of differences in soccer here in the U.S. compared to Spain. One thing in particular, he said, was the way athletics was connected to the school system.

“In Spain, it was different, the sport is separated from the studies,” he said. “Here there is an opportunity to play the sport and have a good relationship with your studies because everything is in the same place.”

This is something Vicente said he really likes about OBU, especially when the team needs to be gone for games. Some aspects of soccer in the U.S. weren’t quite as enjoyable at first though, he admitted. During his first year Vicente said he had to adjust to the different style of soccer. A style he described as more physical because of the larger amount of contact with other players, quicker game pace, and balls kicked up into the air.

“When I got here my first year was kind of hard; this soccer is more physical than Spanish soccer,” he said. “So my first year I couldn’t score any goals at all and I played forward.”

Vicente adjusted to the physical style of soccer however, and by his second year, he was a totally different player.

Vicente was named the Great American Conference Offensive Player of the Year his junior and senior season.

His abilities as a player earned him the trust of his coach, and helped bring his younger brother, Alejandro to OBU as well.

“The coach trusted me and he offered him a scholarship because he liked how I played so he expected the same from my brother,” he said.

Getting to play together is something both players said they are grateful to their coach for. After playing U.S. soccer for four years, Vicente was able to help Alejandro prepare for the more physical style. Alejandro said he is grateful both for his brother’s help and influence in getting to come play at OBU. While he said he would most likely have continued to play while studying in Spain, the experience would have been totally different.

“I have played soccer since I was five, playing soccer is what I like to do,” Alejandro said. “If I were in Spain I would be playing too but it would be more difficult to do.”

Although this year has been good for both of them, the Castillo brothers said it is also a little bittersweet because of Vicente’s graduation in the spring.

“He is three years older than me and in Spain the biggest difference you can play with is two years,” Alejandro said. “This year is the first year we can play together.”

When they both were offered to play for the soccer team, Vicente said they were excited.

“We were excited because we wanted to have the same coach, same teammates, and play together,” he said. “We always were in the same club but we couldn’t play together.”

Alejandro said he isn’t nervous about staying behind after this year, but will miss getting to play with Vicente.

“I think next summer it will be hard for me to come here without him but I think that we have good friends here that are still studying,” he said. “I think it will be hard but I will be ok here.”

Vicente will graduate with a degree in physical education this spring and while he said he will most likely return to Spain in order to teach, playing semi-professional soccer in the U.S. may also be an option for a few years.

“One option is to go back and be a physical education teacher in Spain and I also am checking if I can stay here a few years and play semi-professional soccer,” he said.

Alejandro, who is studying international business, said he hopes to improve his English while at OBU to use back in Spain.

“When I finish I want to return to Spain and work in a business near my town using my English,” he said.

Getting to attend the same school as your siblings is something some people often take for granted. For the Castillo brothers it has been an experience they both have enjoyed as their first and last year together on Bison Hill slowly reaches its halfway mark.

The brothers will take the field together at the OBU Soccer Complex for the final time this weekend. The Bison host Southern Nazarene in the GAC Semifinal Friday at 7 p.m., with the GAC Championship scheduled for Sunday at 2 p.m.