Cavalier baseball looks to build on momentum from 2012 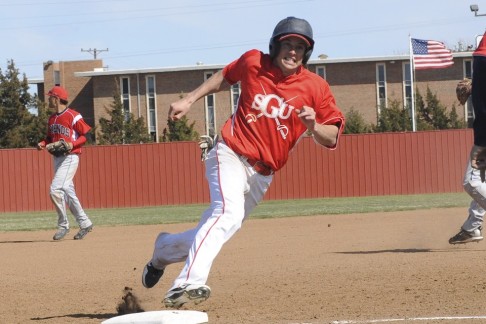 The St. Gregory’s University baseball team will try to carry the positive momentum created last season into its 2013 campaign. After setting school records for conference wins and earning the school’s first postseason victory in 2012, expectations are rising around Bill Nicklas Field.

“I am extremely proud of what we accomplished last year; it was a great season for our program,” said Pingry, who begins his 11th season as head coach. “The momentum we built has been visible through the confidence this team has shown in the fall.”

The Cavs return four starters from last year’s team. Pingry said his squad’s overall athleticism will be beneficial this spring.

“Our speed translates well to our defensive range and provides an exciting and aggressive approach to our offense,” he said. “We should provide an exciting brand of baseball in 2013.”

Chris King returns for his fourth season as assistant coach. King’s primary responsibilities include handling the pitching staff, recruiting, and oversight of maintenance to Bill Nicklas Field. Daniel Duarte, who was part of last year’s record-breaking campaign as a player, will remain with the Cavs as a student assistant.

Fans will notice some changes around Bill Nicklas Field this season. Facility improvements include upgrades to the dugout railings and bleachers. An indoor batting cage also has been installed in the intramural gym.

Junior Ben Moore will begin the season as the staff ace. Moore primarily came out the bullpen last season, posting a 5.50 ERA in 15 appearances. Pingry said the remainder of the rotation is up for grabs. Junior Joey Moreno, junior Jacob Ratliff, juniorJulian Estrada, junior Mike Pople, senior Cody Kollmann and freshman Chris Sutton all are competing for the final slots.

“Moreno brings a wealth of experience as a rotation starter a year ago at Hartnell College and has as much ability as any pitcher on the staff,” Pingry said. “Estrada has a strong ability to control a game, while Ratliff brings a strong competitive presence to the mound. Both Pople and Kollmann go right after hitters and have the ability to develop into solid rotation arms or critical shutdown arms in the bullpen. Sutton provides a reliable arm that can throw every day.”

James Savereide and Cody Guenthart round out the staff and will come out of the bullpen.

“Savereide has the ability to get out of tough situations,” Pingry said. “Guenthart has a lot of ability, competes well on the mound and will provide valuable innings late in games.”

The catcher position will be one of the team’s biggest strengths. SGU enters the season with three players who could see significant time behind the dish. Junior Mark Milioto, a transfer from De Anza College, enters the season as the starter. Milioto projects to hit anywhere from third to seventh in the lineup. Junior Matt Blackwell will be Milioto’s primary backup with Chris Sutton splitting time between pitching and catching.

One of the best position competitions throughout the fall has been the battle at second base.  Luke Taylor, Matt Blackwell and Reid Bradley could all see action at second before the season is over.

As many as three players could see action at third base during the season. ReturnerRoberto Celestino enters the season as the starter. Celestino was fourth on the team last season with a .274 batting average.

Cody Guenthart enters the season as the starting shortstop with Matt Blackwell serving as backup. Guenthart started 38 games last season for the Cavs.

“Guenthart had a strong fall defensively and provides the speed needed to hit anywhere at the top or bottom of the line-up,” Pingry said. “Blackwell has shown a lot of potential at the position with solid defensive range and a strong arm.”

Returning starters Christian Torres and Jordan Funtila are expected to start in left field and center field, respectively.  Torres ranked 14th in the SAC last season in fielding percentage. Funtila, who is expected to lead off for the Cavs, was second on the team with a .325 batting average last season.

“Both Blackwell and Ratliff bring a solid glove and strong arm to the position,” Pingry said. “Moreno provides a solid glove and gap-to-gap contact at the plate. Mora has improved as much as any player in the program and will contribute in a pinch-hitting role from the left side. Stryker will provide a valuable role as a pinch runner with solid speed.”

There are an abundance of options for Pingry at the designated hitter spot. Two of the top options will be Ben Moore and Cody Kollmann. Both saw limited action last season with a combined 15 plate appearances.