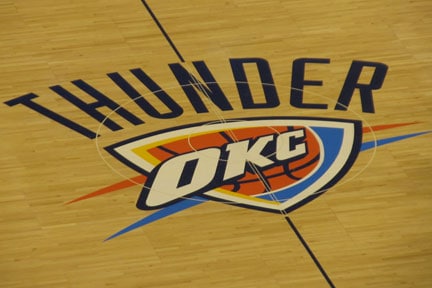 OKLAHOMA CITY – The Oklahoma City Thunder entered the game on Friday night against the visiting Cleveland Cavaliers with only one blemish on their home record for the season.  The Cavs had other plans, and they left the Chesapeake Energy Arena with a 96-90 victory over the leaders in the Western Conference.

The contest remained close throughout, featuring 21 ties and 20 lead changes.  After the game, Coach Scott Brooks credited the Cavaliers for a hard-fought game and explained that it was the team’s 17 turnovers and struggles with offensive rebounding that cost them the win.

In spite of the loss, the Thunder had an impressive showing in several aspects of the game.  Kevin Durant, Russell Westbrook, James Harden, and Serge Ibaka all scored in double-figures.    The team also had 20 assists on 37 made shots, led by Durant with eight.  On the defensive end, the Thunder blocked 13 shots, with six from Ibaka.

Serge showed his skills on the offensive end shooting 6 of 8 from the field for a total of 13 points, two of which came on a forceful dunk that got Thunder fans out of their seats.  In the second quarter, Ibaka also had three of his six blocks in one Cavs possession.

His teammates did not seem surprised by Serge’s aggressive play.  “Serge was great as usual,” Durant said.

In the end, the Thunder’s efforts to close out the Cavs fell short, but with their proven ability to bounce back after a loss, they hope to overcome the struggling Charlotte Bobcats on Saturday night.