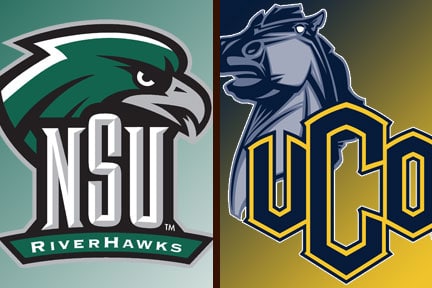 EDMOND – Senior quarterback T.J. Eckert lined up in victory formation, snapped the ball for one last time, and took a knee on the last play of his career and Central Oklahoma beat Northeastern State 17-14 on Saturday evening at Wantland Stadium.

UCO retained possession of the President’s Cup for one more year. The Bronchos finished the 2016 season 3-8, but had much to celebrate after the final game Saturday. After Eckert took a knee, the team celebrated and passed around the trophy.

“To be able to win the President’s Cup and send those 11 seniors out on top, it’s a big deal,” Nick Bobeck said. “I’m really, really proud of the football team. Not just the adversity of the season, but we’ve got an unbelievable number of kids injured. But we found a way.”

UCO trailed 14-10 at the beginning of the fourth quarter. Eckert had a different idea as to how his career would end. He orchestrated a 12-play, 77-yard scoring drive to put the Bronchos ahead 17-14 with just over 10 minutes to play. Eckert completed three passes on the drive for 33 yards including a 1-yard touchdown pass to Caleb Moss. But Eckert also used his legs, rushing three times for 34 yards on the drive.

That didn’t quite put the game away though. The Bronchos forced NSU to punt on its next possession. The punt was downed on the UCO 1-yard line and the Bronchos would need to run 8:30 off the clock, and had 99 yards of field in front of them to do it. The Bronchos proceeded to march down the field, killing the clock, and 7:16 later, 97 yards later, UCO would be faced with a tough challenge.

It was 4th and goal from the 2-yard line. Either put the game away with a touchdown, or force Northeastern State to go the length of the field in one minute with no timeouts left. Bobeck sent his offense back out there. Clay McKenzie ran the ball for a one-yard gain, which meant a turnover on downs. And now it was up to the Broncho defense.

Northeastern State quarterback Dimonic McKinzy completed a pass for 12 yards. Then another for 12. Then another for 39. It was now 1st & 10 Northeastern at the Central Oklahoma 35-yard line. They needed to either go to the endzone, or move it a little closer and try for a field goal to tie.

First down, incomplete pass. Second down, incomplete pass. McKinzy took a shot for the endzone on third down and his receiver tripped over a UCO defender on the goalline. The ref through his flag and everyone knew pass interference was coming, but after a discussion, the flag was picked up and it was 4th & 10 with 16 seconds left and the game on the line.

McKinzy dropped back to pass again and threw a ball over the middle toward Rashawn Eubanks and the Bronchos had three defenders closing in. Eubanks couldn’t hang on to make a catch.

Eckert and the rest of the Bronchos offense trotted on the field and lined up in victory formation.

“Our kids found a way to fight,” Bobeck said. “They found a way. And that shows the character they have, and the grit they have.”

One of Eckert’s go-to receivers over the past four seasons has been Connor Pulley, a senior from Newkirk. Pulley on Saturday had nine catches for 161 yards and he finishes his career with 1,909 yards receiving, seventh on the all-time list.

The McKenzie wearing blue Saturday had a big game too. He finished the day with 145 yards and a touchdown on 31 carries. The junior finished the season with 785 yards rushing and 13 touchdowns.

Addison Staggs led the Bronchos best defensive effort of the season. He finished with eight tackles, a fumble recovery, and an interception.

UCO beat Northeastern State to take a 47-27-2 lead in the series. Saturday’s win is the third in a row in the series. The Bronchos have won three in a row against their rivals seven different times over the past 101 seasons.