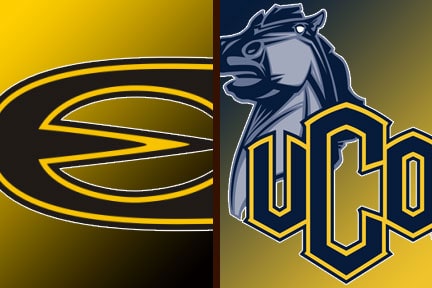 The unbeaten Hornets (3-0) racked up 32 first downs and ran off 95 plays in rolling up 530 total yards (316 passing, 214 running), but didn’t clinch the win until scoring on a one-yard touchdown run with 1:56 to play to arrange the final score.

“We played well at times, but continue to hurt ourselves with mistakes and it’s hard to beat good football teams that way,” head coach Nick Bobecksaid.  “Things are tough right now, but we have to hang in there as a coaching staff and a football team and keep plugging away.”

Running back Clay McKenzie sparked the Bronchos with 13 carries for 115 yards and two scores.  Quarterback Chas Stallard was 18-of-27 passing for 203 yards and a TD in addition to running 12 times for 35 yards and a score, while wide receiver J.T. Luper caught eight passes for 104 yards and a TD.

Linebacker Malcolm Howard was all over the field for UCO in finishing with a career-high 19 tackles and safety David Busby made a career-best 16 stops.

The Bronchos trailed 21-14 at halftime when ESU scored on the final play of the first half and the Hornets treatened to extend that early in the third quarter before Cody Jones ended the threat with an interception at the UCO 12-yard-line.

The Bronchos then went 88 yards in 12 plays to pull even on McKenzie’s seven-yard scoring scamper midway through the third quarter.  McKenzie sparked the drive with 41 yards on five carries, while Stallard had completions of 17 and 20 yards to convert third downs.

Emporia answered right back with a 75-yard TD drive to go ahead 28-21 and UCO lost a fumble at the ESU 26 minutes later to ruin a promising drive.

The Hornets drove down to a first-and-goal at the UCO one, but Collis Walker and Carson Smith keyed a defensive stand that forced ESU to settle for a 20-yard field goal that made it 31-21 early in the final period.

The Bronchos responded with an 81-yard scoring march, pulling within 31-28 on Stallard’s nine-yard TD dash at the 7:39 mark.   Stallard kept that drive alive with keepers of 11 and 19 yards and McKenzie added a 16-yard burst.

ESU took a quick 7-0 lead in the game with a 68-yard touchdown drive on its first offensive series and it stayed that way until late in the quarter when the Bronchos tied it with a big play.

UCO was limited to just eight passing yards in its first three offensive possessions before Stallard found Luper on a short pass across the middle, with Luper bouncing off several would-be tacklers in completing a 54-yard scoring play.  Seth Hiddink‘s extra point tied it at 7-all with 1:40 left in the opening quarter.

The Hornets went ahead 14-7 early in the second period with a short TD run and Central pulled even with 5:23 left in the half with a 71-yard scoring march.

Stallard kept that drive alive with a 13-yard fourth-and-five pass and McKenzie scored on the next play with a 23-yard rumble over the right side.

Emporia then used the rest of the clock to regain the lead, scoring on an eight-yard run on the final play of the half to end an 18-play, 75-yard drive that put the Bronchos in a 21-14 hole.

UCO goes on the road to Northwest Missouri next week.