Cherokee rushes to victory over Grandfield in Class C semifinal 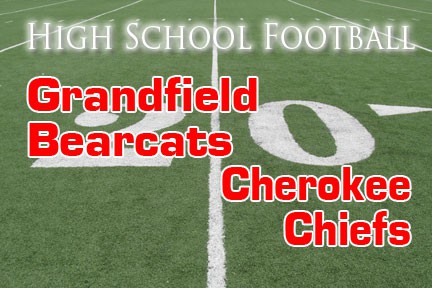 Milam Stadium on the campus of Southwestern Oklahoma State University was the site of the Class C semifinal matchup between undefeated No. 1-ranked Cherokee and No. 4 Grandfield. The game featured two of the most high-profile offenses in Class C football and was played in front of 681 fans. Cherokee ran out 68-50 winners in large part thanks to a record-setting performance by the Chiefs’ senior quarterback Tanner Bowman.

Cherokee would strike first, thanks to an 85-yard run by Bowman to record the only score of the first quarter. He would finish with 356 yards on the ground and account for six total touchdowns, including a 78-yard kick return. Avery Bagenstos was Cherokee’s second leading rusher, chipping in 190 yards and three touchdowns, with his longest of the night coming with 39 seconds left on the clock for 56 yards.

Grandfield struggled to get it going through the first three quarters, scoring just 22 points to Cherokee’s 46. They were led by Jahred Lopez, who rushed for 230 yards and three touchdowns, while also catching one pass for a 20-yard receiving touchdown. Bradyn Fikes was 10-14 airing it out for 100 yards and a touchdown. Mario Blanco chipped in with two touchdowns on rushes of 17 and 10 yards out.

Cherokee outgained Grandfield 546-481, with all of the Chiefs’ yards coming on the ground. The Chiefs rushed 34 times, averaging 16.1 yards-per-carry. The Bearcats rushed for 381 yards on 59 attempts for an average of 6.5 yards-per-carry, but outgained Cherokee in the air 100-0, averaging 7.1 yards-per-attempt.

Bowman’s 356 yards rushing is the eighth-best mark in an Oklahoma High School playoff game. His six touchdowns also tied for the third most touchdowns in a playoff game at any level.

Bowman will lead the Chiefs out onto the field one more time when they take on No. 2 Tipton in the Class C State Championship next Friday, Dec. 5 at a site to be determined later this week.