Choctaw Stickball: A game of history, passion and pride 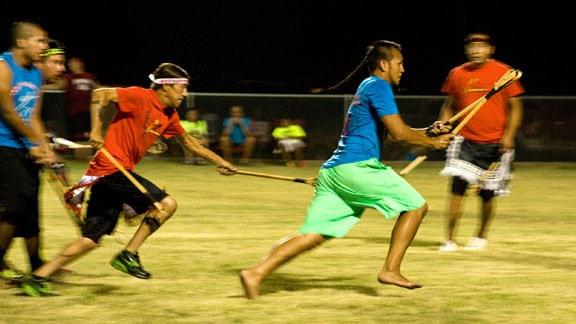 Photo provided by the Choctaw Nation.

Did you ever play stickball when you were young?

What kind of visual does that bring to your mind?  It probably depends on where you grew up.

For some, they recall taking a branch from a tree to use as a bat and play a form of baseball with a wiffle ball or some other object the bat could propel into the field.

For others, the recollection is radically different.  And for those who envisioned a game in which each player had sticks, there were many players on the field and high-impact collisions are just a part of the game, the memories might not be of a distant past.

Both describe a stickball game; however, the latter depiction is of a sport that is cultivated in Oklahoma in the Choctaw Nation today. 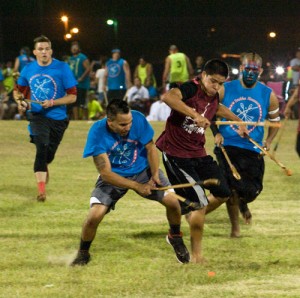 Photo provided by the Choctaw Nation.

Stickball, or Kapucha Toli, as it is in known in the Choctaw language, is alive and well in the Choctaw Nation, but its roots go back centuries as a forerunner of lacrosse and is one of the oldest organized games played in America.

Leagues have been formed around Oklahoma with divisions for youth, as well as adults. And summer camps are available to allow young players to hone their skills.

Oklahoma will even be represented again in the World Series of Stickball in Choctaw, Mississippi. Tvshka Homma will face Beaver Dam in the 18-35 men’s division on July 4, at the fairgrounds of the Choctaw Indian Fair.

The field of play is about the size of an American football field or a soccer field and many games are played on local high school fields.

Those are the basics.  If that sounds easy, the rest of the description might dispel that thought.

Each team has 30 players on the field that can do just about anything to keep the opponents from scoring.  There is pushing, shoving and outright tackling to keep the other team at bay.

It is without question a full-contact sport.

Billy EagleRoad III works with Cultural Services at the Oklahoma Choctaw Nation and shed some light on the beginnings of this challenging sport.

“It was used an alternate to war,” EagleRoad said.

“So if you had a dispute over any kind of resource or land, food, water or hunting grounds, maybe, you would settle the feuds with this game.”

To clarify the intensity, the contest is called the “little brother of war.”

“And back then, they didn’t have any rules really.  The only rules were that you had to use your sticks to get a ball and hit a pole.”

There are a few more guidelines to the modern-day version of the game, though it is still played without helmets or padding.

“As issues come up, health-wise, we’ve changed the rules,” EagleRoad said.  “There are no late hits or early hits, no hitting below the knee or clotheslining.

“People have to work nowadays.  You don’t want to go play a game on a weekend and come back and you’ve torn your knee up or had some kind of serious injury.  So we definitely take measures against those kinds of injuries.

“We do our best.  But it’s like football, you can do only so much to prevent injuries.  And you don’t want to lose the original identity of the game.”

Stickball was played from 1830 until about 1930 in southeastern Oklahoma, then went by the wayside for a time.

With the revival of the sport in the 1970’s, it is becoming a part what children learn as they grow up in some areas of the Choctaw Nation, both with the Oklahoma Choctaws and the Mississippi Choctaws.

In Mississippi, the sport has been big for longer.  Choctaw, Miss., is the host of the World Series of Stickball played annually at the Choctaw Indian Fair.

In 2009, an Oklahoma team was put together combining teams from the Choctaws, as well as the Chickasaws, to send to Mississippi to play in this prestigious event.  It marked the first time a team from outside the state had ever made an appearance in the competition.

That first year, the team played against the highly touted Unified team.

Jared Tom, who works with the Oklahoma Choctaw Nation Cultural Events Staff, remembers the trip and that the new team may have raised a few eyebrows with the intensity it brought.

“In Mississippi, they have been playing since they were little, compared to here in Oklahoma, where we take pride in tee-ball and peewee league football,” Tom said.  “They had better stick skills than us.

“But that year when we played, I think they thought they were going to run all over us.  But the minute they got the ball, we would hammer them. It was almost like a football game.

“And the announcer said, ‘Dang, those Oklahoma boys came ready to play!’”

Even though that team lost, the strong performance has made a way for a team from Oklahoma to be invited back to the event.

It is a sport that has strong cultural ties. Often players make their own equipment, and such equipment is held in sacred honor.  Open fields become places to practice.  And there is a high level of pride in representing your team.

The team itself has been representing well lately as it recently won the “Little Brother of War” tournament hosted at Tvshka Homma.

As with many sports, family and friends spill into bleachers to become fans.  Former players will shout encouragement and advice from the stands, while younger viewers will see what players they want to be like.

Choctaw stickball brings together historical perspective with contemporary style of competition.  It is often used as a means to teach teamwork and values.

Kapucha Toli is re-establishing itself as a part of Choctaw heritage.