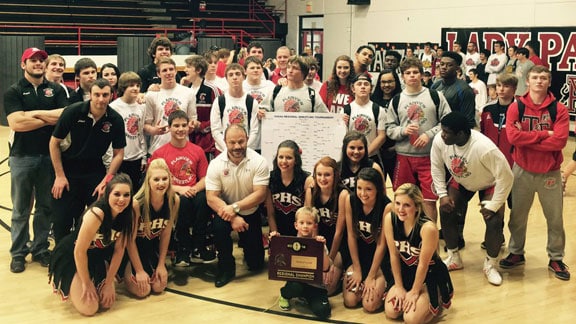 The OSSAA Class 3A state wrestling tournament gets underway on Friday.

Here is the link to the 3A brackets for all weight classifications: 3A STATE BRACKET

• Perry is sending wrestlers in 11 of the 14 weights this year.

• Plainview is looking to defend its team title – the first in school history – the Indians won in 2015.

• Kingfisher’s Tristan Cortez, defending champion in 106 last year and undefeated as well, is back as a senior to defend that title.

• Maddie Roney, who won the state title last year as a junior with Kingfisher at 126, is looking to repeat as state champion, but this time for Plainview and at 132.

• Roney won’t be the only 2015 champion moving up to 132 to grab another title this year. Heritage Hall’s Kaden Gfeller, who won at 120 last year as a sophomore, is in the 132 bracket this year as well.

• Jaxson Roney also made the move to Plainview. The sophomore finished fifth in 113 as a freshman in ’15 and is at state this year in 120.

• Ty Lucas won 138 last year and is in 145 this year hoping to not only repeat the individual feat.

• Ross Shawnee, junior from Geary/Watonga, won 145 in 2015 and is a favorite in 152 this season along with Chase Pfluger, senior from Tonkawa.

• Seth Fritts, who finished in second last year in 160 as a member of the Keys Cougars, is another transfer to Plainview this season. He qualified for state this year at 182.