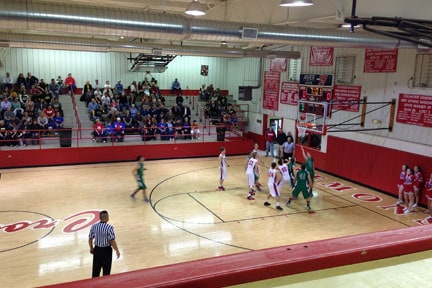 Cade Clay drained an 18-foot jumper in the lane for Rattan with 7.8 seconds left and put the Rams back on top of Silo by one, 49-48.  The Rebels couldn’t get a shot off at the end and that one point proved to be the margin of victory in the Class 2A regional consolation bracket game.

Rattan moves on to play Howe on Saturday afternoon with the opportunity to move on to the Area consolation bracket.

Silo had a 20-18 lead at halftime, but Rattan quickly erased that in the third quarter and led for most of the second half.  By the end of the third quarter, the Rams had extended the lead back to seven at 39-32, matching their largest lead in the first half.

Rattan looked to be solidly closing Silo out in the final period, but Silo sophomore Jarris Hamilton came alive.  He had 17 points for the Rebels, in a reserve role, and 11 came in the fourth quarter.

Hamilton hit three 3-pointers in the fourth, including a go-ahead longball from the right corner that gave Silo a 48-47 lead with 17 seconds remaining.

But Rattan calmly moved the ball back down the court and Clay, a senior, made the game-winning shot with confidence.