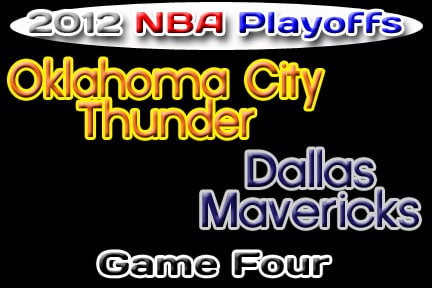 At the end of the third quarter with the Thunder down 81-68, it looked like the series might be moving back to OKC for a Game 5.  James Harden had a different plan.  He led the Thunder on a 23-5 run with less than 10 minutes left in the game to get the win and close out the first round of the Western Conference playoffs in Dallas on Saturday night.

Oklahoma City defeated Dallas 4-0 in the series to move on to the conference semifinals.

Harden’s offensive game was a playoff career best with 29 points on 11 of 16 shooting, followed by Kevin Durant with 24.  The team shot 52 percent from the field and had 52 points in the paint.  For a while, however, it did not seem to be enough as the defending champions looked to extend their season by at least one more game.  It was the Thunder’s stellar bench play, especially by Harden and Derek Fisher, that made the difference.  OKC’s second unit outscored that of the Mavs 52-23.

On the defensive end, the Thunder played a physical game.  Serge Ibaka fouled out, and Nick Collison got close with 5 personal fouls.  Kendrick Perkins had to sit after straining his right hip in the first quarter, and he did not return.  The Thunder defense held the Mavericks to 22.2 percent shooting in the fourth quarter as part of the comeback.

This was the first time Dallas has been swept in a best-of-seven series and only the third time a defending champion has been swept in the first round.  After rallying to come back like the Mavericks did against the Thunder in the Western Conference Finals last year, Oklahoma City now awaits the winner of the L.A. Lakers and Denver Nuggets in the second round.