Clinton hangs on for first win of the season, downing rival Weatherford 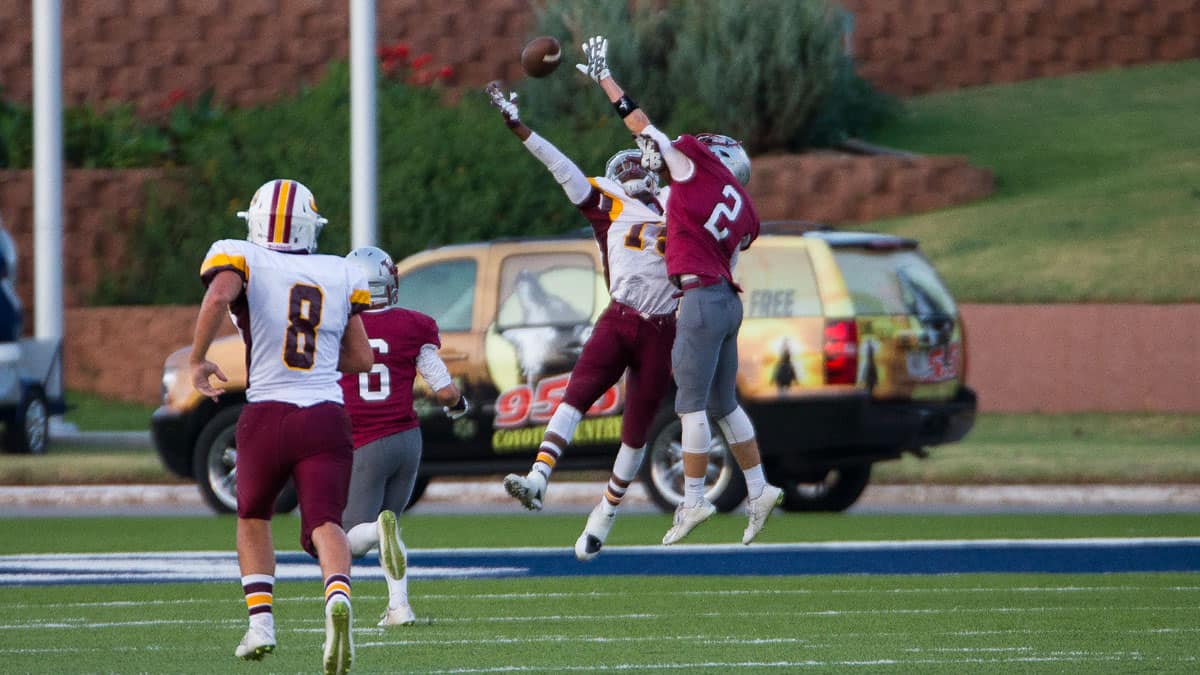 The old cliché that you have to throw out the records when you enter a rivalry game held true tonight as Clinton, entering the game on Friday without a win on the season, dropped Weatherford 17-14 in the Custer County Conflict in Weatherford at ASAP Energy Field.

The Red Tornadoes displayed a methodical approach on offense, collecting 236 yards rushing on 50 carries. In fact, Clinton possessed the ball for 10 minutes longer than the Eagles en route to their first win of the season as both teams opened district play.

A brief first quarter that lasted 13 minutes in real time failed to yield a single score. The deadlock was broken a third of the way through the second quarter, however, as Austin Maine hit JJ Brown for a 32-yard strike on third and seven to give Clinton a 7-0 lead following 16 plays, 80 yards and 9:33 milked off the clock.

Weatherford was unable to get anything going on their next possession, and the Red Tornados capitalized again. Maine took it on the quarterback keeper and scampered 56 yards for what appeared to be a touchdown. However, the sideline official marked him out at the Eagles’ four-yard line. Two plays later, Deonte Barker punched it in from three yards out to push the lead to 14-0.

Facing a two-score deficit, WHS finally found pay dirt on their final drive of the half. With just 1:25 on the clock, Ryan Terry marched the Eagles down the field with pass plays of 11-, 13- and 22-yards before picking out Spencer Ard in the corner of the end zone for the 4-yard aerial touchdown. The half would end with Clinton nursing a 14-7 lead.

Although it was a ho-hum third quarter, it would prove to be crucial as Sergio Deleon tacked on a field goal from 33 yards out to put CHS up by two scores after a drive of over six minutes midway through the period. The setting for some late drama looked to be made as Weatherford responded with their second touchdown midway through the final frame. Terry accounted for 50 of the Eagles’ 59 yards on the scoring drive, including the final six yards on a run into the end zone for his second score of the night.

Clinton managed to take off over four minutes on their ensuing possession before Deleon, who was an unheralded weapon as a punter averaging 43.8 yards on four punts for the night, pinned the Eagles at their own seven. Terry went 1-3 passing for -3 yards on the possession while almost fumbling the ball away on a run to open the drive. The Red Tornados took over on downs, and though multiple penalties delayed the celebrations, CHS opened district play with their first win of the season over their bitter rival from 15 miles down the road.

Maine did the heavy lifting for the visitors, racking up 170 of Clinton’s 268 yards, including 148 on the ground to go along with one score. Weatherford was a more balanced attack, as Wade Haugen led the way passing for 66 yards and rushing for another 46 yards. Barker led both teams with 11 tackles to his credit.