If college football had a 64-team bracket 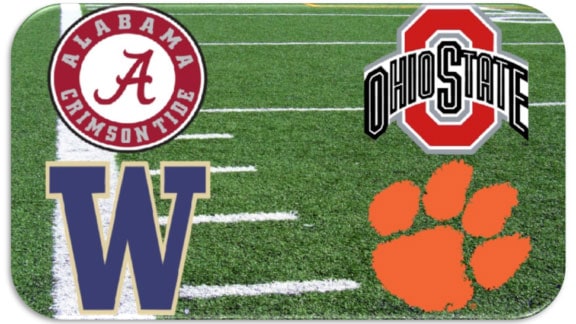 It wouldn’t be college football without controversy.

The playoff selection committee is far from perfect, and it has been known for making puzzling decisions when selecting four teams that will battle it out for a chance at a national championship.

This season was no different, for the committee left out the Big 10 champ Penn State in favor of Ohio State. The same Buckeyes team that lost to the Nittany Lions and didn’t play in their conference title game.

Penn State’s snub had fans all around the country calling for a playoff expansion. Spread across Internet forums and social media sites were advocates for a playoff ranging from six to 24 teams.

Well, I say hogwash! Why limit ourselves to those numbers?

College basketball’s postseason tournament, March Madness, brings about some of the most exciting action and insanity sports can offer. Why not give football that same luxury?

Yes, the idea is unrealistic. However, I’m ignoring real-world limitations for now and turning the college football world upside down by creating something that would only be possible in a video game.

That is right, I’ve created a playoff where 64 teams duel through a seven-week gauntlet to determine the real national champion (the injury setting switched to off, of course).

I took the role of the selection committee to see how this “One vs. All” tournament would play out. I selected the teams and divided them into four geographical regions (South, Midwest, East and West) consisting of 16 teams each.

This is a hypothetical postseason, so erase Penn State’s heartbreaking Rose Bowl loss to USC from your memory banks, and dispose of Ohio State’s goose egg against Clemson like you would dog poop. In other words, bowl results have no bearing on each team’s seed.

To set the field, I used a combination of the CFB Playoff rankings, the AP poll, the Coaches Poll, the former BCS computers and other useful polls published by national sports media outlets.

The first four teams selected from each conference were placed in separate regions, regardless of seeding. Also, teams were moved around when needed to avoid rematches and same-conference matchups in the first round.

In the interest of fairness, only teams with at least six wins were considered. Sorry, Mississippi State and North Texas.

To ensure the most accurate results possible and to evade my personal bias, I simulated every game several times using the complex algorithms of the What-If Sports and National Sports Rankings game simulators.

Who will reign supreme? Will Alabama continue building its dynasty and become the first team to win 19 games in a season? Will Penn State prove the selection committee wrong with its first national title since 1986? Will Western Michigan show itself to be a legitimate contender?

The first two rounds will be played on the campuses of teams with the better seeding (No. 1 hosts No. 16, No. 8 hosts No. 9, etc.). Bowl games will begin in the Sweet 16 to ensure the traditional postseason we all know and love isn’t eliminated. This will cut the number of bowl games down from 41 to 15.

The Elite Eight locations are as follows: Sugar Bowl (South), Cotton Bowl (Midwest), Orange Bowl (East) and Rose Bowl (West). The Peach Bowl and the Fiesta Bowl will remain as the Final Four locations, and the Raymond James Stadium in Tampa, Florida will still host the championship game.

Now, let’s look at the bracket. Who’s in? 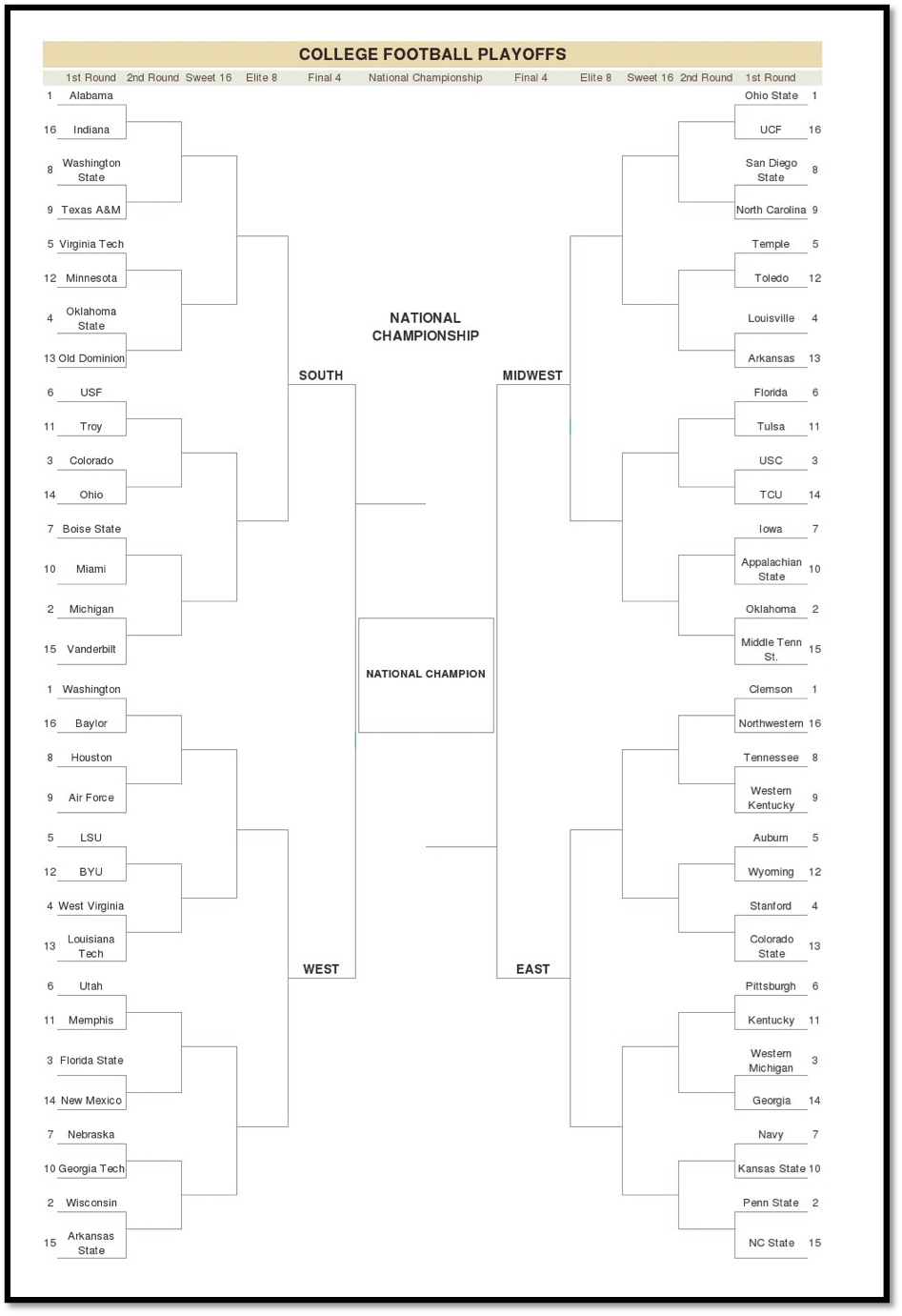 It turns out Alabama’s run to the Final Four wasn’t as dramatic as some would think. The Crimson Tide cruised through the South Region, losing only five of its 80 simulated games. Oklahoma State managed to steal one game from the overall No. 1 seed, but that was about it, for Alabama won that series 24-1 (games) by an average score of 35-17.

The Nick Saban vs. Jim Harbaugh dream matchup came to fruition in the Sugar Bowl, and for the first few simulations, it lived up to the hype. Michigan trailed the Tide 3-2 (games) after five simulations, but that was the closest the Wolverines would get. Saban’s squad went on to win 18 of the next 20 simulations, giving the defending champions the victory by an average score of 27-17. 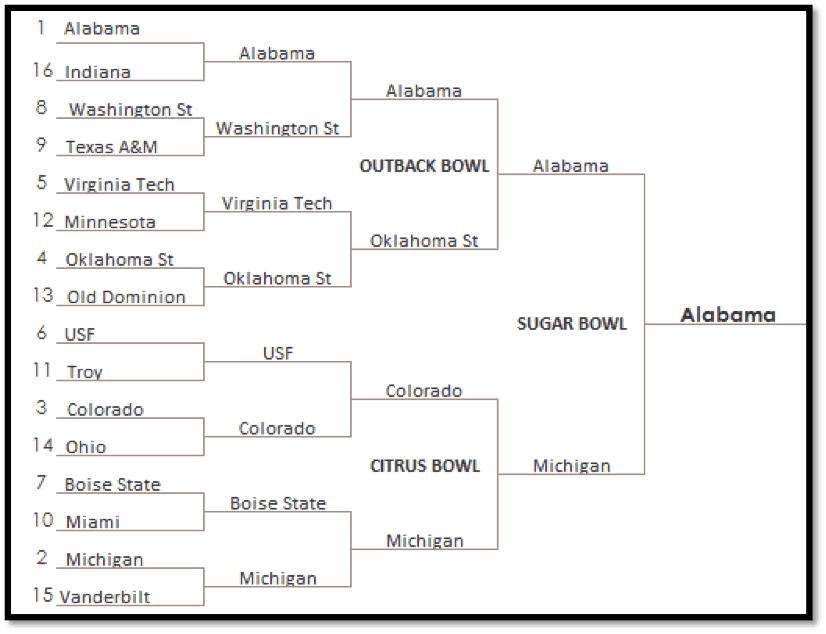 Elsewhere in the region, Washington State and Texas A&M provided plenty of first-round fun. Both teams held a two-game lead during the simulation, but Mike Leach’s team was able to hold off a late Aggie run to win the series eight games to seven despite losing the aggregate score, 25-24.

The second-round series between OSU and Virginia Tech was also decided by one game. The Mason Rudolph-led Cowboys overcame a 7-5 (games) deficit to squeak into the Sweet 16, winning with an average score of 27-24.

Many doubted Washington’s legitimacy as a contender heading into the playoffs, but Jake Browning and his Huskies defended their high ranking. The Pac-12 champions easily dispatched of Baylor (13-2, 45-21) and Houston (15-0, 43-13) before taking on an opportunistic LSU team in the Holiday Bowl. 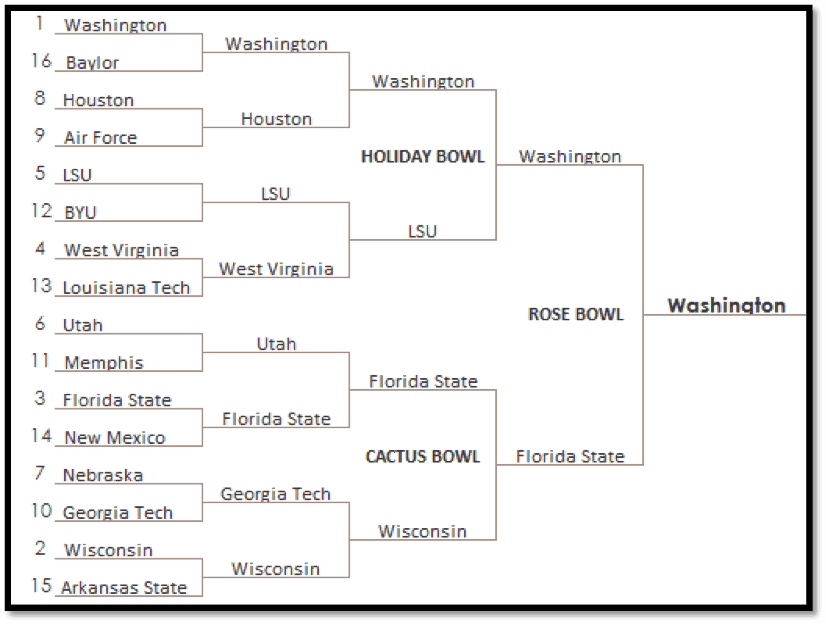 Florida State won six of its last seven games to end the season, and it continued that streak with a run to the Rose Bowl in the Elite Eight. The Seminoles defeated Big 10 runner-up Wisconsin along the way, but it is not the result that is shocking; it is how easily FSU conquered the Badgers.

Although the aggregate score of 27-22 makes the series appear closely contested, it actually wasn’t. The Seminoles dominated the simulations, winning 13 of the first 15 games on the way to an 18-7 victory. Washington finally put FSU’s fire out, manhandling the Seminoles 20-5 (games) with an average score of 39-24.

The West Region also gave us the first double-digit seed to advance in the tournament. The simulations were extremely tight as 10-seed Georgia Tech spoiled Nebraska’s chance at a rematch with Wisconsin, edging the Cornhuskers 8-7 by an average score of 29-26.

So, the selection committee got at least two teams right. Alabama and Washington proved they belong among the top four teams, according to my 64-team model. Now let’s see how Ohio State and Clemson faired.

Also, this is a good time to remind you these are simulations completed by the algorithms of What-If Sports and National Sports Rankings, NOT simply my opinion.

Oklahoma was the surprise team of this region despite being a No. 2 seed. The release of the Joe Mixon video the day before the start of this tournament didn’t do the Sooners any favors, but it proved to be only a minor distraction. OU swept through the first two rounds, winning all 30 simulations by an average score of 39-22. USC was even more dominant, defeating its opponents by a 43-17 average.

With two of the hottest teams in the country meeting in the Sweet 16, something had to give. The series came down to the last game, and though the Trojans were able to put up 40-plus points on 10 occasions, the computers chose the Sooners to advance with a 13-12 game margin and average score of 39-36. 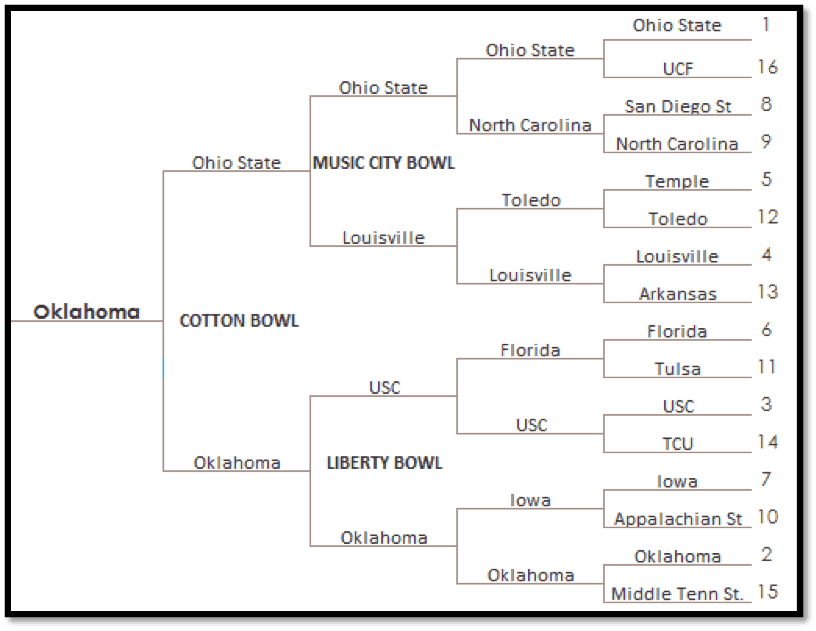 In a rematch from early in the season, OU got its revenge on Ohio State. Yes, Urban Meyer led the Buckeyes to a dominating 45-24 win against the Sooners in September. However, Ohio State was never the same after the loss to Penn State, and it showed in the simulations.

Upset wise, a No. 12 seed seems to defeat a No. 5 seed almost every year in the NCAA Basketball Tournament, and Toledo carried that tradition into college football’s version of the event. The Rockets flew by the AAC champion Temple with relative ease, emerging victorious in 10 of 15 matchups and averaging a score of 22-19 along the way. Florida was able to avoid the same fate, overcoming its anemic offense to slip by up-and-coming Tulsa, 8-7 (games). The Gators won by an average of four points.

After seeing Clemson skunk Ohio State 31-0 in the real College Football Playoff, many people would be quick to choose the Tigers to breeze through this region into the Final Four. However, in this imaginary tournament, that game never happened. Instead, we were left with a Clemson team that was highly inconsistent throughout the year and was involved in six games that were decided by a touchdown or less. One of those games was home loss to Pittsburgh, the No. 6 seed in this region, late in the season.

Tennessee and Auburn were able to stay within a touchdown of the Tigers in the average score category, but they could not muster up enough wins to take the ACC champions down. Dabo Swinney’s squad advanced to the Orange Bowl without much struggle, complying a 44-11 simulations record through the first three rounds. 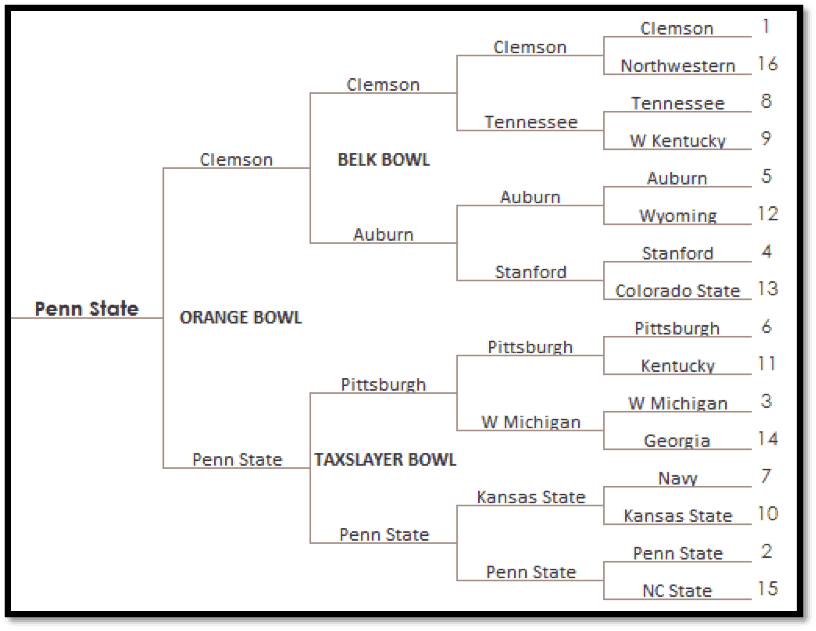 Meanwhile, Penn State kept cruising right along, extending its win streak to 12 games. The Nittany Lions got revenge for their early season loss to Pittsburgh, defeating the Pathers in 18 of 25 simulations by an average score of 33-29 to set up a blockbuster Orange Bowl matchup with Clemson.

And yes, your eyes do not deceive you; the Big 10 champions proved they were no fluke. Penn State, led by a great defense, defeated the Tigers convincingly, 17-8, limiting Deshaun Watson and Clemson’s high-powered offense to 23 points per game.

In my simulated College Football Playoffs, the Nittany Lions made it to the Final Four, just like they should have in real life. Clearly, the committee chose the wrong Big 10 team.

In another interesting matchup, Western Michigan saw its undefeated season come to an end at the hands of Pittsburgh. The Broncos, who struggled with Georgia in the first round, put up a good fight, but the Panthers walked away with an 8-7 (games) victory, the average score being 23-22. Western Michigan’s overall performance in the tournament can only hurt the future playoff hopes of non-Power Five teams down the road. 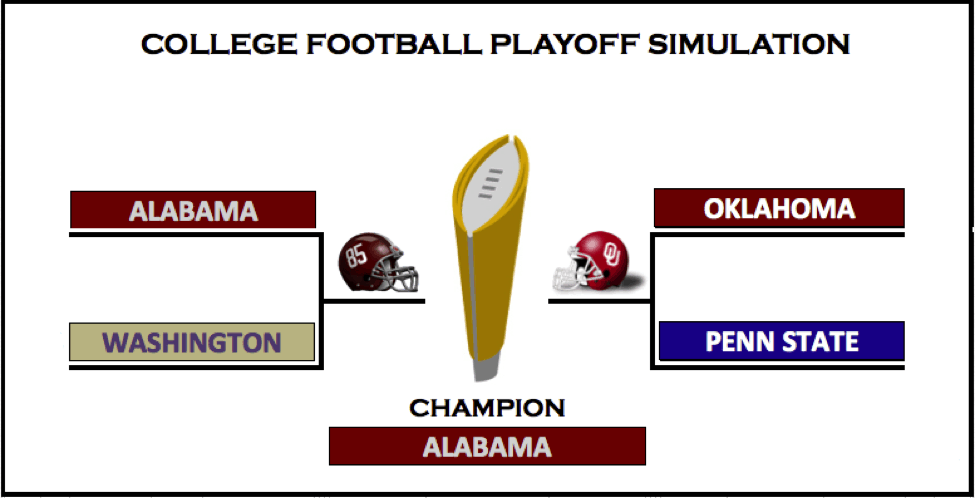 The Peach Bowl gave us a matchup we saw in this year’s College Football Playoff. Alabama physically dominated Washington 24-7 in that game despite some offensive woes. In my simulation, the Huskies were a little more competitive in terms of the final score, but the result remained the same. The Crimson Tide rolled into the National Championship, winning a decisive 32 of 50 games with an average score of 31-24.

The Fiesta Bowl featured a battle between a recurring power in OU and a resurgent program in Penn State. Both teams entered this game on 13-game win streaks, but one of them had to end. James Franklin’s team won the first four games of the simulation before the series evened out a little bit, but it was the Sooners who prevailed in the end, bringing Penn State’s dream season to an abrupt holt. OU won the tightly simulated series 29 games to 21 by a field-goal margin of 38-35 to reach its first national title game since the 2008 season.

Maybe this could have been the Sooners’ year, and all the talk about Bob Stoops’ inability to win the “big one” would have finally be extinguished. Unfortunately for the Sooners, Alabama was the team waiting on the other side. The Tide dominated as expected, emphatically picking apart OU by a combined score of 104-9 in the first two games of the simulation. The Tide won with an average score of 37-27 on the way to a 69-31 series win. In 12 of the 100 simulations, Alabama held the Sooners to 10 points or less.