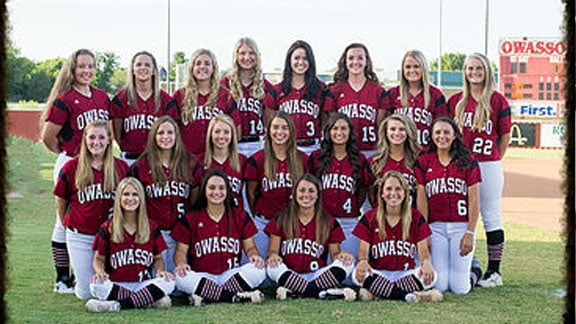 The Owasso softball team has been putting on quite a show lately.

The Lady Rams have won eight in a row, which includes taking the title at the Cor Jesu Tournament in St. Louis, Mo., last weekend and are now 19-2 on the year.

Coach Shane Eicher said he knows he has quite an arsenal with which to work in the circle and talked about just how important that is.

“Pitching and defense are the keys to everything in this game,” Eicher said.

“I couldn’t be more pleased with all of our pitchers. We had a freshman throw a game in St. Louis and she threw a two-hit shutout. So we’ve got a unique situation with us where we’ve got about seven pitchers. And I love the competition.

“To me, competition is what makes these kids better. And not only in the circle, we have a lot of competition out in the field as well. ”

It is a competition that runs throughout the program, not just on the varsity level.

“Our JV has won one varsity tournament and is getting ready to play in another varsity tournament in Moore later on this week. So we just want to challenge our kids to play the best that we can play to just try to keep getting better.”

The varsity has done its share of winning as well. The Lady Rams opened the season with a nine-game winning streak, which included winning the Broken Arrow Tournament.

With the solid work he has been getting on defense and in the circle, Eicher also said his bats were starting to come around.

“At the beginning of the year, we struggled to be consistent,” Eicher said. “We want to be consistent one through nine. And obviously that can’t happen, for the most part.

“But recently, in St. Louis, I thought everybody did their jobs. Some games we had the top of our lineup produce, in other games, it was the middle, and then you have the bottom of the lineup producing. So you just never know.”

When Eicher said it could be anyone at any time, he knows it to be true. It’s a scenario that has already played itself out this season.

“Our 9-hole hit a walk-off two-run homer against Broken Arrow a couple of weeks ago. She’s as big a threat as anybody in our lineup.”

Although Owasso doesn’t look to send every ball out of the park, it can produce on the scoreboard. The Lady Rams have notched at least nine runs in more than half of their contests this year.

“We have a chance to be really special offensively. We’ve outscored our opponents, 145-39, so far in 21 games, so we’re pretty pleased with that.

“We have a team batting average of .349. And we’re not a bunch of homerun hitters – as a team, we have eight. But we like to go gap to gap quite a bit, with line drives and so on.”

Owasso is leading its district at the midpoint of that portion of the schedule. The Lady Rams are unscathed through their first six 6A-4 games.

The next seven games on the schedule are all district contests, starting with a home game against Muskogee on Thursday.

Eicher said that he was proud of what his team has accomplished so far in the season, including the wins in Broken Arrow and St. Louis. But he said also he knows there is more to be done.

“The ultimate goal is to get to that state tournament.We can’t be happy with just winning a couple of tournaments here.

“We want to win the big one at the end.”