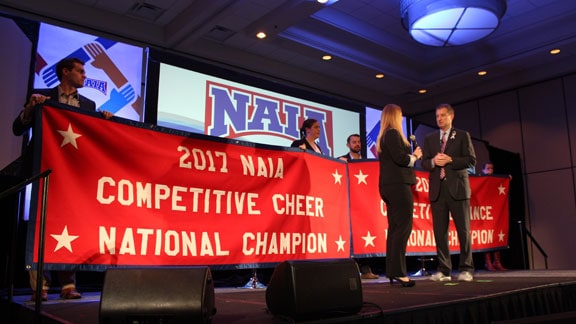 From the NAIA
Chad Waller, Director of Communications and Sports Information

KANSAS CITY – The National Association of Intercollegiate Athletics (NAIA) is excited to announce that Competitive Cheer & Dance will become the 24th and 25th National Championships in the history of the Association, announced Saturday (April 16) at the 75th annual NAIA National Convention. The National Administrative Council (NAC), a membership group comprised of athletic administrators, unanimously approved the motion to gain national championship status.

“We’ve carved out a niche in intercollegiate athletics for more than 1,500 student-athletes in 67 NAIA programs, and taken the unprecedented step of writing the first official collegiate rulebook for the sport. Competitive Cheer & Dance represents a truly collaborative effort by the NAIA, thanks to the hard work of numerous coaches, administrators, staff and athletes.”

In order to gain national championship status, a sport must be sponsored by a minimum of 40 varsity institutions, completed at least two National Invitationals and approved by the NAC. There are 67 NAIA institutions that declared their intent to participate in competitive cheer & dance postseason in 2016-17.

Prior to the 2015-16 season, the NAIA and the Coaches’ Executive Committee published the first collegiate athletics association rulebook for Competitive Cheer & Dance. The rulebook, policies and procedures for the sport were developed under the direction of the executive committee of the Competitive Cheer & Dance (CCD) Proposal Committee with oversight from the National Administrative Council’s Rules and Ratings Committee. The rulebook group included coaches, athletics directors, sports information directors, conference commissioners and experts in competition, rubric/scoring, marketing and judging.

“It’s really special… it has taken a lot of years to get to the varsity sport status and that is huge and very exciting,” said CCD Executive Committee member and Baker head coach Lyndsey Payne. “No one else is doing this and, personally, being a part of this is exciting to watch it grow to what it is and the potential for what it can become. There is still so much more room for growth.”