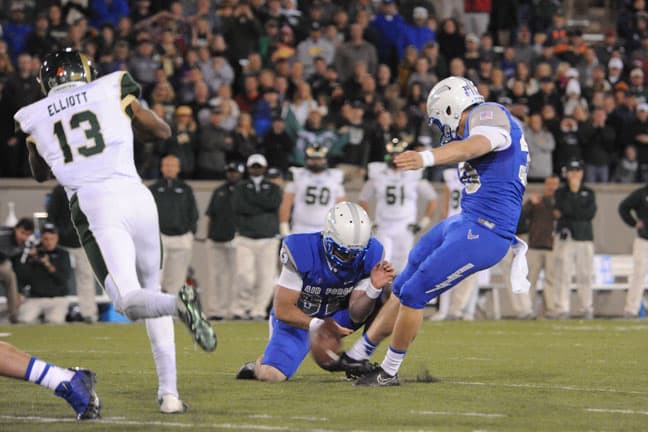 Will Conant has the game-winning kick against Colorado State. Photo provided by USAFA Sports Information.

Will Conant is not your average football player. While other Division I football players have an eye towards the NFL, Conant is preparing himself for service in the United States Air Force. Where most student-athletes enjoy extended summer and winter breaks, Conant has taken a total of six weeks off per year for the last four years. This is the life of an Air Force Cadet.

Conant, a native of Edmond, grew up as the son of a preacher and has always felt a call to ministry. Coming out of Edmond Memorial High School in 2011, Conant was one of the top-rated kickers in the state after garnering All-Conference and All-Big City honors his junior and senior years while earning three varsity letters. When Air Force offered a scholarship, he knew that it was the perfect opportunity to combine his passion for football and ministry. 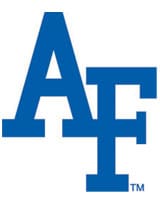 “The Lord’s calling was for me to go to the military, to be involved with these people and change lives within the military,” said Conant about signing with Air Force. “One thing that I’ve always heard from the Lord is that it’s the sick who need a doctor. I’ve always felt called just to live within the world of the military and that’s where the Lord put me right now.”

Through his first two years, he didn’t feature in the Falcons’ plans. During his freshman season at the Air Force Academy, Conant played on the junior varsity squad. His sophomore year he never saw the field. Conant finally found his way onto the gridiron last year as a junior, and the results were among the best in school history.

Appearing in 12 games as a junior, Conant connected on 32-33 PATS and 11-13 field goals, including a career long 52-yard try against Colgate in his first ever collegiate game. His 84.6 percent rate on field goal tries placed him fourth on Air Force’s single season record list. Finishing the season with three kicks of 50 or more yards, Conant tied for third on the career list and also became just the second Falcon kicker to finish a season with three or more kicks from 50 yards or farther.

“It was good to be on the field junior year,” Conant said about his junior season. “I got a good opportunity that first game, and it wasn’t the prettiest of balls, but it went in and set the precedent for the rest of the season and this season as well.”

Conant has continued that success in his senior season. Through the 12-game regular season slate, Conant converted on 39-39 PATs and 16-18 field goals, including two kicks from 50 yards out. When he wasn’t knocking in field goals, Conant also served as the team’s punter, averaging 42.5 yards on 49 punts. He twice earned Mountain West Conference Special Teams Player of the Week honors, and was recently announced as the MWC Special Teams Player of the Year. Conant also earned a semifinalist nod for the Lou Groza Award which is given to the top kicker in Division I.

“That was cool just to get recognition as one of the best kickers. It was fun to be a part of that and have a chance to be in that race in the first place,” said Conant about the honors. “I think it’s more important to just get the memories of what happened here.”

The regular season ended in story-book fashion for Conant and the Falcons. Playing against then No. 21-ranked Colorado State, the teams were tied 24-24 in the dying seconds of the game. Conant had his number called, and he went out to try for a game-winning kick from 39 yards out. The Rams used their final timeout of the game in an attempt to freeze Conant, but he was unfazed. The snap was smooth and the ball sailed through the uprights, completing the upset bid.

“It was actually really cool,” said Conant. “I knew the Lord was going to take care of that game and I had a lot of peace. It was just fun to make it happen.”

For now, the Falcons have one last game to play. They will face the Western Michigan Broncos in the Famous Idaho Potato Bowl on Saturday, Dec. 20 at 2:45 PM. The team has a chance to complete a phenomenal turnaround from the squad that went 2-10 last season. With another win, the Falcons will earn their first ten-win season since 1998 and their first bowl win since 2011. For Conant, he will graduate as one of the most decorated kickers in program history.