Consistency and familiarity are factors for Bronchos this season 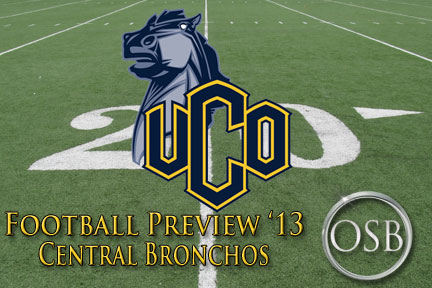 It’s something that Nick Bobeck and the Central Bronchos are getting used to after what must have felt like a decade of transition.

Coming into a season in the same conference with the same coach and something of the same schedule hasn’t happened for UCO since 2009 into 2010.  And the program has felt the adjustments.

The Bronchos went 2-8 last year in the first full season in the Mid-America Intercollegiate Athletic Association.

“We have a little more familiarity with the conference.  We’re still in our second year, so we still learning about where we’re traveling and how everything operates at specific venues.  But other than that, we have a good idea who we’re playing; the schedule just flips from last year, home and away.  And we at least have a feel for our opponents and the way the league works.”

And having things remain constant goes deeper than just the schedule and league.  It has a place in everyday activities.

“The kids are starting to understand what we want from them.  They’re understanding the way we talk and that’s an important thing in building a program.”

Bobeck also has a good understanding of what he’s getting from some of the players in the skill positions that are returning.  One that stands out is senior running back Josh Birmingham, who is fifth all-time at UCO in rushing yards (3,205) and is the program’s second leading scorer (264).

“We know what we’re going to get with him,” Bobeck said.  “He’s an exceptional football player and a good person.  We’re excited about having him for another year.”

Fellow senior Adrian Nelson should be the starter at quarterback again this season.  Nelson threw for more 1,700 yards and tossed nine TDs in 2012 and has more good receivers to find this year as well.

“He’ll have some tools to throw to,” Bobeck said.  “We’ll get Birmingham out of the backfield a little bit and give him some opportunities in space.”

“The big thing for him is to clarify his reads and make sure he’s making sound decisions, especially in the run game.”

Christian Hood was the leading receiver in 2012 with 47 receptions and returns for his junior season.  Another junior, Marquez Clark, who transferred in last year from Navarro College and was a former teammate of Nelson, will be available this year. Sophomore Sam Johnson will also be a target for Nelson.

The defense returns two of the top three tacklers from last season.

Senior defensive back Devoris Dozier has turned some heads already this fall.

“Devoris has done a great job and had a really nice camp for us,” Bobeck said.  “He’s starting to take on more of a leadership role than what he’s had in the past.

“He’s a talented kid who has to learn he has to bring it every day because people are watching him.”

Adrian Shoecraft, another senior, will also be expected to have a big impact in 2013.

“He’s really a rock on the defensive side of the ball.”

Bobeck’s strategy with the defensive (and offensive) line is to grow it himself.

“We’re really young both sides of the football up front,” Bobeck said.  “When we came in, we dedicated ourselves to bring in quality young people on the offensive and defensive sides of the ball.

“The biggest issue is that they are young, 18- and 19-year-old kids.  We feel good about the kids that we have, we just have grow them up and build them.  We have some exceptional kids on the defensive line, like Tyler Newton.  He’s done a great job for us in starting all year for us last year.

“There are some others that didn’t get to play last year, like Deontay Wilson and Adrian Mack, and some kids like that, we believe are going to be really good football players.  It’s just a matter of us getting them the experience they need.”

The Bronchos face a 10-game schedule made up of all MIAA opponents, in their second full season with the league.

The season opens on a Thursday in Joplin, Mo., as the Bronchos take on Missouri Southern State.  Perennial power Pittsburg State is the home opener at Wantland Stadium the next Saturday.

Homecoming and Senior Day will be on Nov. 2 against Lincoln, a team the Bronchos beat last year.

“I feel really good about where we are and where we’re going.  Once we start playing games, we’ll see how we react.
“I know we have more depth and I feel much better about our team.  I believe that the mental aspect of what we’re doing is going to be the real challenge because we are so very young.”

And Bobeck said that he knows the tangible evidence of his team’s progress will show up when they take the field this fall.

But for the Bronchos’ veterans and youth, the consistency factor should be a positive for the UCO program.