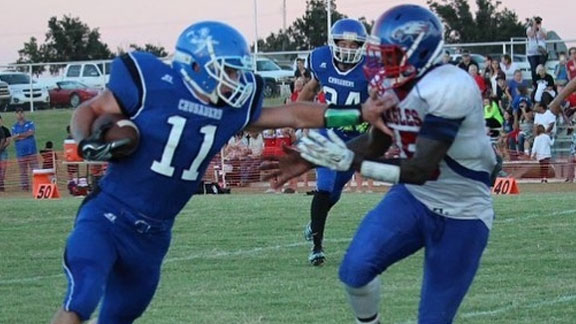 The Corn Bible Academy football team travelled to Temple on Friday for the last regular season game of the year. The Crusaders soundly beat the district opponent by a score of 46-0 at the half and managed to secure a home playoff game in the process.

CBA dominated the game on offense with 320 rushing yards and 119 passing yards in that first half. The Crusaders were led by senior Spencer Boese with 202 total yards, followed by junior Andre Miller with 119. Garrison Reimer led the team in tackles with 12, followed by James Vercellotti, who also ran for 100 yards, with 10 tackles and two sacks.

“I’m very proud of the way all 12 have overcome adversity and never given up on the goal which was to glorify Christ by giving 100 percent all the time,” coach Todd Smith said.

“They work to get better every practice and game, and I’m especially very proud of the seniors for their leadership.”

In regard to the seniors, Spencer Boese and James Vercellotti rank among the top players in the state. As of two weeks ago, Spencer was the third leading rusher in Oklahoma among all the class sizes combined, and James ranked in the top 50.

With the blowout of Temple, CBA won the tiebreaker over both Grandfield and Southwest Covenant and secured the No. 2 seed in the playoffs. CBA will play host to Sharon-Mutual, the No. 3 team in the northwest district.

“They’re really a pretty good team,” Smith said regarding Sharon-Mutual. “They score a bunch of points. We will have to play well.”

CBA last played Sharon-Mutual on the road in 2012 in the first round of the playoffs, and Corn last hosted a playoff game in 2013. The Crusaders will begin their post-season run at 7:30 p.m. on Friday, Nov. 11.