Corn Bible rolls through another week of opponents 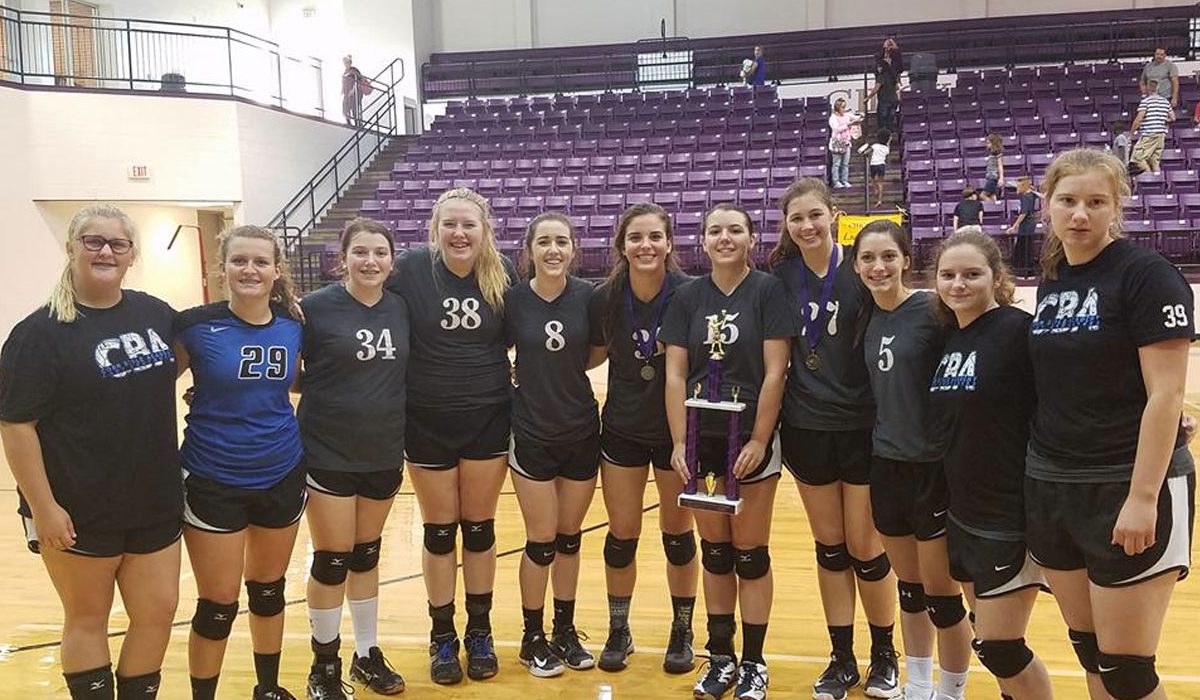 The Corn Bible Academy volleyball team, the top-ranked team in the state, finished another long week of matchups with a perfect record. Highlights of the week include victories over Elgin, Chisolm, and winning first place at the Chickasha Tournament for the third year in a row.

“The tournament on Saturday was a great end to a big week,” Coach Erin Basinger said.

The Lady Crusaders began the long week of play in Elgin on Tuesday. Despite winning in three sets, CBA played sloppy and struggled to perform at peak level.

On Thursday, however, the Lady Crusaders found themselves facing a much more difficult opponent and began the night down by two sets in Chisolm. The CBA girls kicked into high gear, however, and won the following sets 25-15, 25-14, and 16-14. Throughout the game against Chisolm, senior Halle Penner recorded 21 kills, junior Kimberly Javorsky had 22 digs, and senior Mikayla Nelson recorded 13 kills, 34 assists, and 20 digs.

Raegan Russell (left) and Halle Penner (right) were both selected to the Chickasha All-Tournament team.

With the intent to take home the first place trophy for the third year in a row, the Lady Crusaders next traveled to Chickasha on Saturday determined to win. CBA began the day playing Lawton Ike. Corn easily won the pool play match in two sets, despite committing many unforced errors. CBA next played against the OKC Storm, a homeschool team, barely squeaking by in two sets. In the final round of pool play, CBA once again won in two sets, this time against Tecumseh.

Having won every set in pool play, CBA entered the first round of bracket play with overconfidence, losing the first set to Guymon, 23-25. However, the Lady Crusaders cut down many of their errors in the second set, this time winning by a commanding score of 25-10. Although extremely fatigued from a long week on the road, CBA managed to defeat Guymon in the final set, 15-12, to advance to the championship game.

Once again playing the OKC Storm, the Lady Crusaders came out strong, winning the first set 25-18 against their very talented opponents. The second set remained extremely competitive throughout, but the Storm ultimately came out on top 27-25. The third and final set of the game once again ended with a nail-biter, but this time CBA ended on top with a score of 17-15.

Key stats for Saturday include Halle Penner with 48 kills, 50 digs, and 18 aces; Mikayla Nelson with 86 assists and 14 aces; Kimberly Javorsky with 58 digs; and junior Brittan Newton with seven blocks. Following the championship game, Penner and sophomore Reagan Russell were named to the All-Tournament team.

“Thursday was a tough fight for a win and a long trip home, so winning on Saturday coming from behind several times showed just how much drive this team has,” Coach Basinger said. “They never gave up all day, even though they were tired.”

This week CBA will play Weatherford at home on Monday, Crossings Christian on the road on Tuesday, and Clinton at home on Thursday.