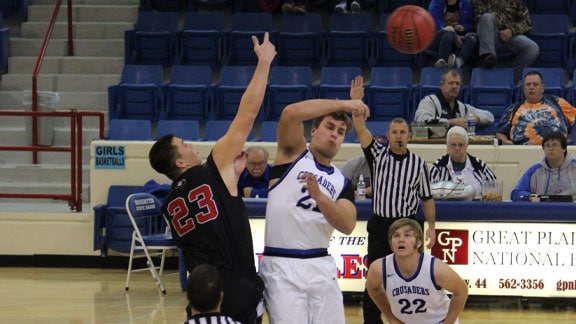 The Corn Bible Academy basketball team competed in the Burns Flat Tournament last weekend where the Crusaders took home the third place trophy with a Saturday win over Grandfield. However, CBA lost senior Dakota Clayton on Friday night to a head injury that could have been much more serious than it ultimately turned out to be.

CBA began the tournament against the Tipton Tigers, who won the football state title only one week prior. The game remained neck-and-neck until the fourth quarter when the Crusader offense caught momentum to score a total of 22 points. The final score was 53-42.

In the semifinal round on Friday, CBA faced off against the host team, Burns Flat-Dill City, whom the Crusaders had lost to just three days prior. Burns Flat started the game strong on both offense and defense, obtaining a 24-10 lead. Shortly after the second quarter began, however, the game came to a screeching halt when CBA’s Dakota Clayton jumped up for a loose ball and came down on his head.

“When I had gotten to him, he was not breathing, his eyes were bugged out, and he had turned blue and grey in color,” said Dakota’s mother, Tina Clayton. “A few seconds later he started seizing and foaming from the mouth.”

After approximately seven minutes, Dakota stopped seizing and began to regain consciousness. Once an ambulance arrived, Dakota was carted out of the gym and taken to the Clinton Regional Hospital where a helicopter would be waiting to fly him to Oklahoma City.

During this traumatic time, fans and players for both teams gathered on the gymnasium floor to pray for Dakota and his family. After discussion between the coaches of CBA and Burns Flat, the game was called at the current score of 26-12.

Following this decision, the CBA team traveled to the hospital to find Dakota doing miraculously well given the circumstances of the injury. Although the CT scans came back with good reports for Dakota, he was still taken to The Children’s Hospital in Oklahoma City that evening before being released later the next day.

“As we were praying in the circle, I could feel God’s presence and the Holy Spirit in that gym,” CBA cheerleader Amy Freeman said.

“Lives were changed and relationships were strengthened that night. God’s hand was at work. We believed in the power of prayer and the living hope that God gives. We serve one amazing God.” 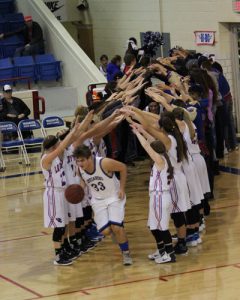 Carter Smith leads the Crusaders through a tunnel made up of CBA and Burns Flat students alike.

The atmosphere around CBA’s game on Saturday was certainly unlike any other. Following an incredibly emotional evening the night before, both of the Burns Flat basketball teams and their cheerleading squad convened at CBA’s game to cheer on the Crusaders and to show support for Dakota, who arrived to join his team on the bench just as the game tipped off.

Boosted by a crowd of supporters comprised of relieved CBA and Burns Flat fans alike, the Crusaders jumped off to a hot start, holding the Grandfield Bearcats to only four points in the first quarter. CBA continued to extend the lead until the fourth quarter, when Grandfield mounted a major comeback.

However, the Crusaders managed to hold off their opponent and with a series of free throws made late in the game won, 41-37. To cap off the day, Dakota Clayton was named to the all-tournament team and was present to accept his medal, truly a miracle given the events of the previous evening.

“He has headaches most of the day and is sore, but he is laughing and talking,” Tina Clayton said. “He’s home now and doing well.”

CBA will next play against the Hammon Warriors on Dec. 13 starting at 6:30 p.m. in Corn.

Credit for all photos: Wesley Javorsky.