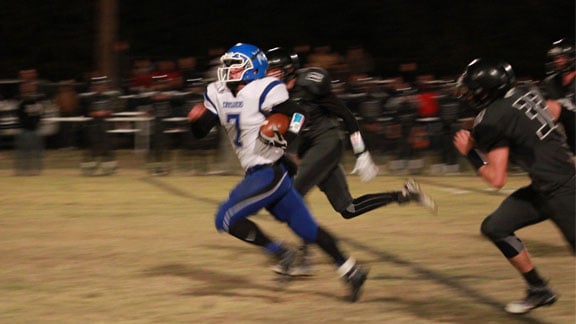 The Corn Bible Academy football team’s season came to an end Friday night in Pond Creek-Hunter as the Crusaders fell to the top ranked team in Class C, 40-16.

CBA started off hot and caught Pond Creek-Hunter off guard, quickly obtaining a 16-0 lead. Pond Creek, however, managed to stifle Corn’s momentum to cut the deficit to only two points at halftime. The Crusaders continued to struggle trying to stop their opponent in the second half, allowing the Panthers to score four unanswered touchdowns.

“Pond Creek-Hunter is just a pretty good team. It was a tough loss, especially since we jumped out early,” Coach Todd Smith said. “But one thing is for sure: our boys left it all on the field.

“I’m so proud of the effort our guys gave this year. I really think we bonded unlike any team I’ve ever coached.”

The Crusaders were coached by Todd Smith, Asa Zoschke, and Brendon Schmidt.