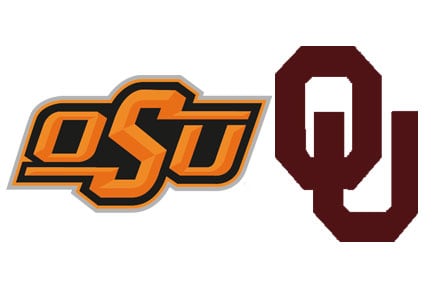 Oklahoma State and Oklahoma are in the top 20 in the first Associated Press poll released for the 2013 season.

OSU opens the season 13th, according to the college football writers.

Oklahoma State went 8-5 in 2012, but finished the season strongly with a 58-14 blowout of Purdue in the Heart of Dallas Bowl.

The Cowboys have been ranked (and not ranked) in a wide variety of places throughout the summer. The AP poll is the one that has been around the longest.

OU starts the season ranked in the No. 15 spot.

Oklahoma was 10-3 overall last year and shared the Big 12 title with Kansas State, going 8-1 in the conference.

This marks the first time that OSU has been atop OU in a preseason AP football poll.

Both open the 2013 season two weeks from today.  Oklahoma hosts Louisiana-Monroe on Aug. 31, while Oklahoma State travels to Houston to face Mississippi State on neutral ground.