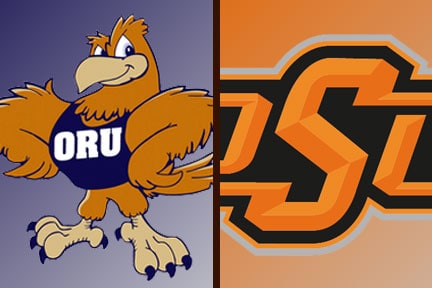 Three Golden Eagles finished in double figures as Faith Ihim led the way with 16 points, while adding five rebounds. Maria Martianez was shy of a double-double scoring 13 points and pulling down seven boards in the loss.

Brittney Martin and Kaylee Jensen led Oklahoma State with 21 points each while Jensen finished with a double-double pulling down 12 rebounds.

TURNING POINT
The Golden Eagles pulled within a point, 53-52, with 47 seconds left after a Kaylan Mayberry jumper in the middle of the lane. After a pair of free throws from Oklahoma State, a turnover by ORU gave OSU the ball back with 14 seconds left forcing the Golden Eagles to foul. The Cowgirls made two free throws and a late basket in the final seconds to seal the win.

INSIDE THE BOX SCORE
– ORU forced 15 Oklahoma State turnovers and scored 20 points off turnovers in the loss.
– The Golden Eagles shot 39 percent from the field while the Cowgirls barley edged ORU shooting 40 percent.
– An 8-0 run by ORU to start the game helped the Golden Eagles take a 13-9 lead at the end of the first quarter.
– Both teams shot 55 percent from the free throw line however, OSU was 12-of-22 while ORU finished 6-of-11.

UP NEXT
ORU continues its road swing Sunday heading north to play the University of Michigan. The Golden Eagles and Wolverines will tipoff at1 p.m. (CST) from the Crisler Center.