Crimson Storm bounces back in a big way 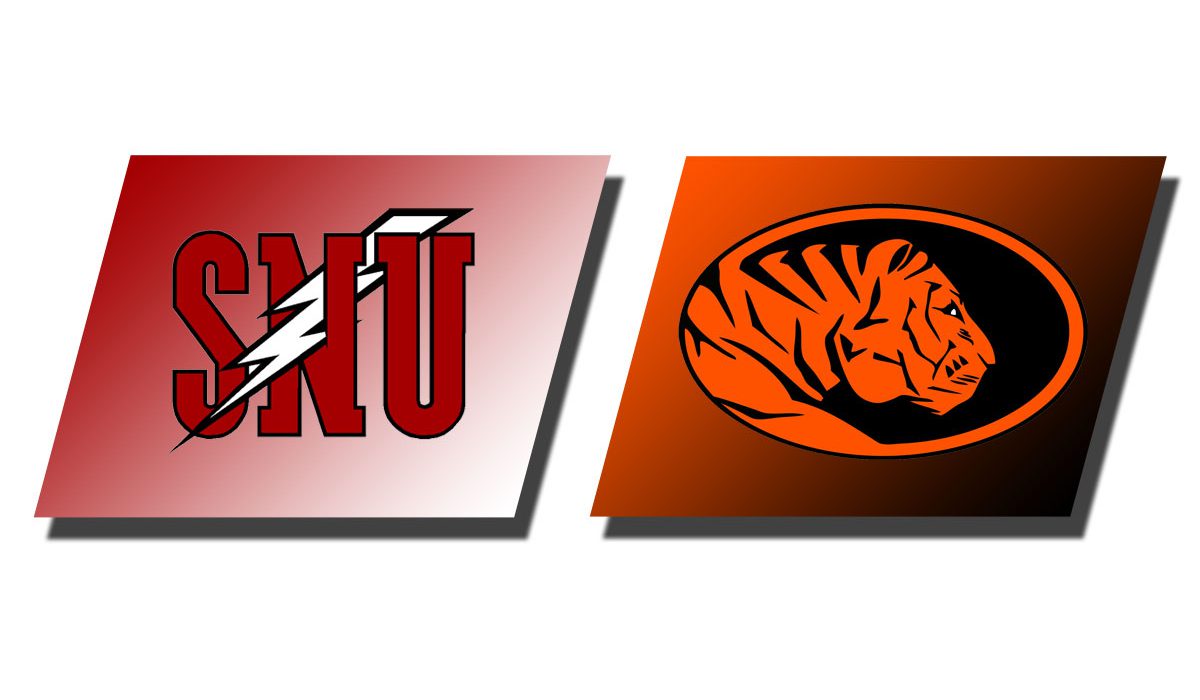 ADA — Before the season even started, Southern Nazarene wasn’t given much of a chance of a win by some as it received the least amount of votes possible in the Great American Conference Preseason Coaches’ Poll.

While there is still nine games left in the 2017 season, hopefully a thought or two got changed Saturday night as the Crimson Storm (1-1, 1-1 GAC) picked up its first win in school history over the Tigers (1-1, 1-1 GAC) with a 33-30 thriller. It is the first time SNU has been .500 or better since joining Division II.

SNU led by as much as 11 in the second half, but watched East Central take a 30-26 lead with 4:11 left. The Crimson Storm though had one final drive left in the tank as it went 10 plays and 70 yards to take the lead with 19 seconds left. Jacob Spady punched it in with a 7-yard run to give SNU the late lead, but ECU threatened in the waning seconds. The Tigers got it to the SNU 45 on big play with seconds left, but on the next play, Stephen Price came up with the game-ending sack to seal it.

Spady finished with 211 passing yards and three touchdowns as he was 16-for-24. He also ran for 107 yards and a touchdown. SNU as a team ran for 197 yards and two touchdowns. Reese Carlson had six catches on the night for 70 yards and all three of Spady’s touchdowns through the air went to different receivers. Zach Walker and Reid Roelofs each had four catches and touchdown while Nate Walker had the other one. Zach Walker had 59 yards receiving while Roelofs had 51. Nate Walker‘s only reception was the touchdown pass.

Josh Jordan had 12 tackles for SNU and notched an interception. Zack Loyd had two sacks and three tackles for a loss to go with his five total tackles.

SNU spotted the Tigers nine points before the Crimson Storm got on the board with just 47 seconds left in the half. Southern Nazarene got the ball with 3:30 left in the half and marched seven plays, 83 yards before Spady found Nate Walker for a 19-yard pass to cut it to 6-9.

SNU unloaded in the second half and started early. On its first drive in the second half, the Storm went seven plays and 83 yards again. Southern Nazarene was faced with a fourth-and-seven from the East Central 41-yard line before Spady hit Zach Walker for the 41 yard strike. On the ensuing kickoff ECU’s Trey Harvey coughed up the football and the Storm pounced on it at the ECU 36-yard line. After a Tiger personal foul, put the ball at the 21, Spady put SNU at the one with a 20-yard run. Daniel Ramos III punched it in with 10:47 left in the third to push the lead to 20-9 and complete the 5-play, 36-yard drive.

It took the Tigers four plays to answer with 8:54 left in the third to make it 20-16, but SNU answered on its next drive. The Storm went 65 yards on eight plays and had two plays of 16 yards are more on the drive. One was a 16-yard pass from Spady to Reese Carlson and the other was a Zach Walker rush for 16 yards. Spady capped the drive with an 11-yard pass to Reid Roelofs to put SNU up 26-16 with 5:07 left in the third.

That set the stage for SNU’s final and game-winning drive.