Could the Sooner Backfield Be Too Crowded? 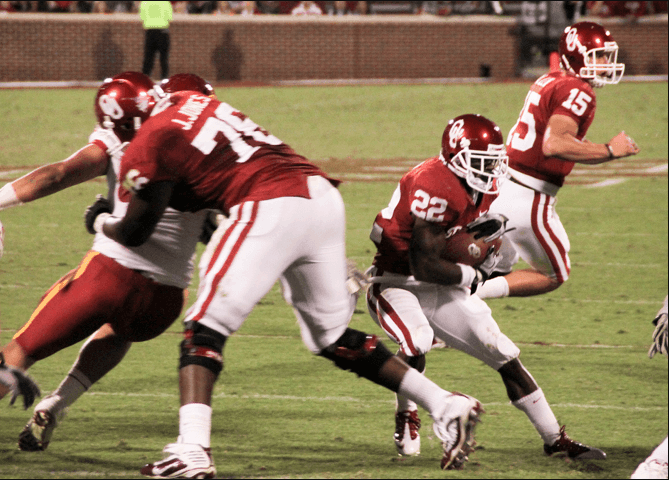 After the Sooners posted their most recent depth chart on soonersports.com I received a message from a friend asking why Finch was missing from the two deep.  I let him know that I hadn’t heard anything but would be looking into it shortly.  I found out that due to his injury last year and the staff not wanting to risk anything in the spring, the coaches now have Jonathan Miller as the starter and Brennan Clay as the back up.  The good news is that the OU backfield while unproven seems to be so loaded with talent that the second leading rusher from last years team could find himself at number three on the depth chart going into the fall.

This time last year DeMarco Murray was the man going into fall camp.  He had come back for his senior season and everyone knew that he was going to be taking the bulk of the carries.  This year is a different story with four strong contenders competing for playing time.  Jonathan Miller, Brennan Clay, Roy Finch and freshman Brandon Williams will be attempting to make an impact this fall.  I can see the Sooners going with a running back by committee approach because they each bring a unique running style to the game.

Jonathan Miller will be coming in as a redshirt sophomore.  He redshirted last year to take another year to recover from a serious knee injury he suffered his freshman year.  He was able to show some flashes of greatness two years ago when given the opportunity.  He runs well between the tackles and has great balance and vision.  Even though he’s the leader going into the fall he is still somewhat of an unknown.

Brennan Clay was one of the Cali trio to hit campus last year.  He is a balanced back with the ability to make catches out of the back field.  He had a good start to the season last year before being knocked out of the Florida State game.  He suffered a concussion in the forth quarter and missed the next two games.  Clay finished the season with only 9 attempts for 127 yards and added 3 catches for 13 yards.  He definitely has the speed and hands to be a great third down back.  He can also move out to the slot and be productive as a receiver.

Roy Finch was second on the stat sheet last year with 85 attempts for 398 yards and 2 touchdowns.  He was a spark in the offense last year and made an impact when he was healthy.  Though he was injury plagued as a freshman it was easy to see why the coaches and his teammates were so high on him going into the season.  He had several highlight real type runs but the first one that comest to my mind was his TD run against Baylor.  He left his feet as he went through the line, bounced off a lineman, caught himself with one hand and raced into the end  zone.   We’ll all be looking forward to more carries like that this season.

Brandon Williams has to know that making an impact as a true freshman is a big challenge.  The last true freshman running back at OU to really make a big splash now plays on Sunday’s for the Minnesota Vikings.  The crazy thing here is that Williams has actually drawn comparisons to AD.  Now before you get too excited the comparisons seem to be about how physically ready Williams is to play at the college level.  Another thing that Williams has going for him is the fact that Stoops hasn’t been shy about playing true freshman if they’re ready to go.

While the media seems to be heaping praise on OU’s passing game this offseason, the backfield seems to be fully loaded as well.  If this group of guys is able to add balance to an already loaded offense, the Sooners could put up big numbers on the ground as well.