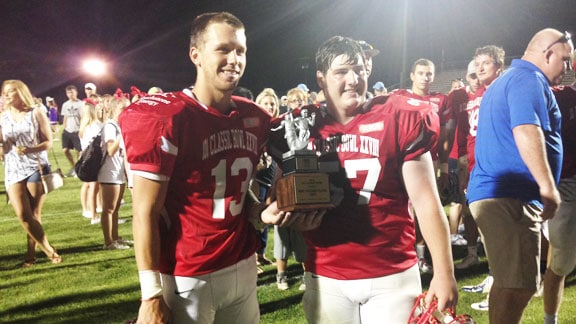 WOODWARD – It took big plays on both sides of the ball for the East team to come away with a victory in Classic Bowl XXVIII.

Jake Curless (Chisholm) came up big on defense in a game dominated by the defenses on both sides. And Josh Hampton (Cashion) crossed the goal line for the game’s only touchdown. The East won, 11-2.

Curless had nine tackles on the night, including a sack. The defensive lineman said he enjoyed the week of festivities in Woodward.

“You don’t know these guys, but everyone just comes together here. It’s a grand time. Football just brings people together.”

Curless also said the environment of hard work practicing during the week leading up to the game was relaxed because of the people involved.

“Everyone knows what they’re doing and they know their jobs and they go and do it. Everyone just works together.”

Hampton pulled in seven receptions on the night and hit the century mark with 100 yards receiving. He was the only player in the game to hit triple digits in receiving, rushing or passing.

His 18-yard touchdown reception from Beau Jinkens (Kingfisher) with 4:39 left in the game was the go-ahead score.

Hampton also said he had an enjoyable week.

“It was pretty good,” Hampton said. “It was the best week I’ve had in a while – just a great experience.”

Jaden Valles was also recognized as the MVP from the West team. He had a game high 10 tackles, including two sacks and five tackles-for-loss and forced a fumble.

One of Valles’ sacked was for a safety in the first quarter, which accounted for all the scoring the West would produce on the night.