Cyril just keeps winning into the home stretch of the season 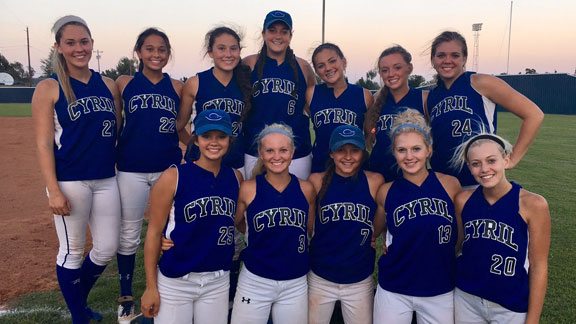 The No. 1 team in Class A took down Class A’s No. 8 team on Thursday afternoon, 1-0, in the Sterling Tournament.

And for Cyril, that meant win No. 21 on the season. With no losses.

It’s hasn’t always been easy on the road to 21-0, but coach Tim Persinger said he knows where he is right now is a good place.

“It’s been a battle. There are some really good quality teams in Class A, especially. You know, Binger, Central, they’re just really good ball clubs.”

Persinger spoke about every area of the team as being a part to contribute.

“We’ve had some good pitching from Shekinah Gilliam and Blair Brown.

“And timely hitting, one through nine, the kids swing it really well. And defensively this year, that’s probably the biggest difference this year, is that we’re just better defensively.

“And we’re a year older, so I’m hoping that we’ve matured a little bit. But the kids have just been playing hard and working really hard.”

With 21 consecutive wins, Persinger said the team is not just looking at that number alone.

“The ultimate goal is to go win it all. We’ve been five times in the last six years to the state tournament, so they’re ready to go win it. And I guess you could say that if we come up short, we’re disappointed. But you always are. But that’s our goal and the kids are just a great group of kids to work with.”

In the massive 30-team tournament this weekend in Sterling. Cyril got a bye through the first round, coming up against Hydro-Eakly on Thursday afternoon. The Pirates plated Grace Young for the lone run in the contest.

With the win, Cyril earned the right to take on Class 5A Lawton Eisenhower in the next round.

There have been some blowouts, but some pretty tight contests as well for the Pirates. Persinger said his team’s ability to stay tough in any situation is what has gotten it to this point in the year.

“We played Apache the other day and when Apache and Cyril play, you just throw the records out. It’s a rivalry, but a good rivalry.

“They jumped out 2-0 on us, and it’s 2-0 through five innings. And the kids never panicked. The kid from Apache was throwing really well, but they just said, ‘We’re going to win.’ And they never quit.

“In years past, sometimes they’d get down and duck their heads. But now, it’s like, ‘We’re here to win. It’s what we’re going to do. And we don’t care if it’s the first inning or the last inning, we’re going to come back and beat you.’”

Persinger pointed also to the game against Class 4A Bridge Creek in the Nninekah Tournament earlier in the year in which his team was down 4-1 and down to it’s last at-bat. In that final inning, Cyril got three straight hits followed by a grand slam by Gilliam, which gave the Pirates a 5-4 win and the opportunity to face Bridge Creek again in the tournament final.

Cyril won that one 11-1 and took the tournament title.