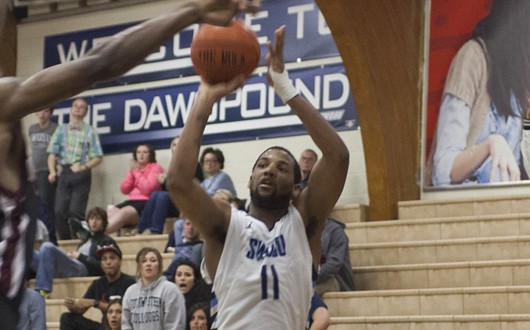 The Southwestern Oklahoma State men’s basketball team came up just short in a comeback attempt against Southern Nazarene on Thursday (Jan. 24), dropping a 67-63 contest to the Crimson Storm. The loss drops SWOSU to 7-9 on the year and 6-4 in the Great American Conference.

SWOSU came out of the gates quickly, building a 10 point lead of 17-7 on a Dominick Cornelius 3-pointer with 14:47 to play in the first half. Southern Nazarene slowly closed the gap before finishing the half on a 19-8 run and building a 39-32 lead at the break.

The Crimson Storm kept the Dawgs at bay in the second half, allowing SWOSU to tie the game twice but never relinquishing the lead. A pair of free throws from Thomas Davis tied the game at 61-61 with just under three minutes to play, but SNU ended the second half strongly as well, going on a 6-2 run in the final 2:42 to pull out the victory.

Cornelius had a big game for the Dawgs, scoring 21 points and pulling down eight rebounds in the setback. Davis added 16 points while Ryan Donahoe had three points, 10 rebounds and seven assists.

SWOSU will look to rebound from consecutive losses on Saturday when they travel to Alva, Okla., to face the Rangers of Northwestern Oklahoma State. Tip time is slated for 4 pm.

Doug Self is the Sports Information Director at Southwestern Oklahoma State University.