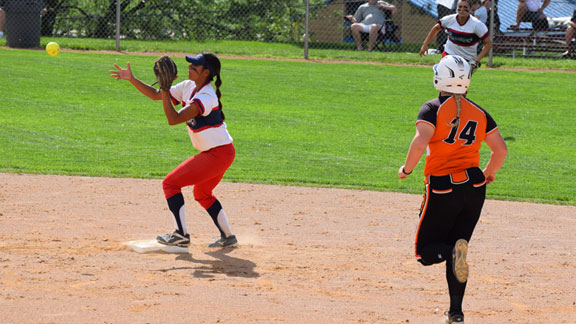 SIOUX CITY, Iowa – One of the best seasons in program history came to an end Tuesday for the St. Gregory’s University softball team. No. 2 seed Auburn-Montgomery rallied late for a 3-2 win over the third-seeded Cavaliers in an NAIA Softball World Series elimination game at the Jensen Softball Complex.

SGU concludes its campaign with a 48-7 record – the best mark by win percentage in program history.

“This is obviously not the result we wanted, but I am so proud of how this team battled over the last week,” said SGU coach D.J. Sanchez. “To lose the first game of the tournament and fight back to get into this position was exceptional. I am grateful to our seniors and the legacy they’ve left, and I’m excited about the future of St. Gregory’s Softball.”

The two-time defending champion Warhawks had their hands full early. The Cavs’ Jessica Nelson snapped a scoreless tie in the fourth with a two-out, two-RBI triple off the top of the wall in right. That scored Bryanne Knox and Janely Cruz.

Ashli Hafford, meanwhile, held AUM in check for most of the day. After giving up a pair of first-inning hits, the sophomore settled down to surrender only one hit over the next four innings.

That changed in the sixth, however. After Hafford set down the first two Warhawks, she gave up a pair of walks and an RBI single to Hayden Henderson to make it a 2-1 game. Bryn Houlton came on in relief and was greeted by a two-RBI single from Rose Schmidt, and all of the sudden, the Warhawks had a 3-2 advantage.

The Cavs didn’t go quietly in the seventh, getting runners to the corners with two outs. But the rally was snuffed out when Taylor Powell got Katie Godfrey to ground out to short to end the game.

“I am very proud of this team and all that we’ve accomplished this year,” Hafford said. “We worked really hard to get to this point – from the fall to the World Series. Thank you to our seniors and all of your contributions. To the underclassmen – we can use this as a learning tool and get better.”

SGU’s Sammy Leisinger led all hitters with a 3-for-4 game. Sutv Meely and Nelson each recorded a pair of hits.

Hafford (12-4) suffered the loss after giving up three runs on four hits over 5-2/3 innings. She struck out four and walked four.