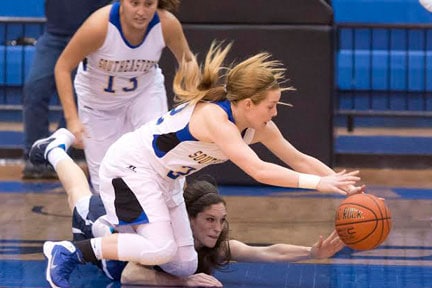 DURANT – Southeastern took advantage of a strong defensive showing and defeated Southwestern, 87-78, to remain undefeated in the Great American Conference.

The win gave SOSU a 5-0 record, not only in the GAC, but also in Bloomer Sullivan Arena this season.

Emily Williams led the way for Southeastern, scoring 23 points and pulling down eight rebounds in a solid outing.

Breana Small-Peppers logged a double-double with 12 points and tying her season high 16 boards.

“We really tried to stop the three and to force them on the dribble,”  Grover said.  “I felt like that worked and that we did a good job of trying to take them out of what they do, at least comfortably.

“We were also able to cut off a lot of their drives.  That dribble-drive-motion offense, they want to try to get to the basket and they want to try to shoot threes.  So they’re going to do one or the other and I felt like they shot a lot of contested shots.  We had a lot to do with that.”

SWOSU put up many three-pointers.  The Lady Dawgs took 60 percent of their shots from the field from behind the arc, and made only 10 of the 42 they took.

Meanwhile, the Storm were able to turn defense into offense and push the ball up the court.

“We scored in transition and Taylor Richards was really strong in that,” Grover said.

Richards had 16 points on the night, while Cheree Kiser made it four Storm players to score in double figures with her 12.  Haley Schaefer and Ronay English narrowly missed out on that, scoring nine each.

“They were swtiching a lot of screens and that ended up where we got some free drives to the basket.  We got some open shots and good thing we knocked them down.

Southeastern’s Breana Small-Peppers is guarded by Southwestern’s Jessica Penner as she looks to go to the basket. Photo by Dan Hoke.

Southwestern’s leading scorer on the season, Michelle Fisher, had a game high 25 points in the loss, connecting on five of the 10 three-pointers her team made.

But it was a different group of starters that took the court for SWOSU in Durant, trying to extend what was a four-game win streak over the Savage Storm.

Senior Taryn Sayama was out with an injury, and sophomore Kylie Boggess wasn’t able to follow up her best outing of the season (22 points and 10 rebounds against Arkansas Tech) as she injured her ankle in practice.

It was combination of many factors for SWOSU coach Kelsi Musick to try to lead her team through.

“Sarina (Sayama) didn’t make her shots,” Musick said.  “She’s been one of our leading scorers in the last few games and one of the best three-point shooters.  When she goes o for 5 that doesn’t help.

Sarina Sayama started for the first time this season and junior Chelsea Bates notched just her second start of the year.  Bates had 15 points, eight rebounds and four assists on the night.

“We’re mixing people around,” Musick said.  “I had Jaimee Cohen playing on the wing; she’s normally our true five.  We’re having to mix and match positions.  I started two point guards tonight to try to make up for the fact that I don’t have two starters.”

But Musick didn’t make any excuses for her team.

“You know, in that situation, other people just have to step up.  You still have to be able to make shots.  They’re all capable of making shots.”

And where Southeastern had a stellar showing, the Lady Dawgs didn’t shine as bright – the free throw line.

“Free throws – they’re free,” Musick said.  “We missed 11.  That’s the difference in the ball game.  You can’t miss free throws if you want to win big games, especially when our numbers and our bench isn’t what it normally is.”

Southeastern moves to 8-3 overall to go with its 5-0 conference record.  The Savage Storm remain in Durant to host Northwestern on Saturday at 2 p.m.

Southwestern drops to 6-5 and 3-2 in the GAC and will travel to Ada to take of East Central at 2 p.m. on Saturday.