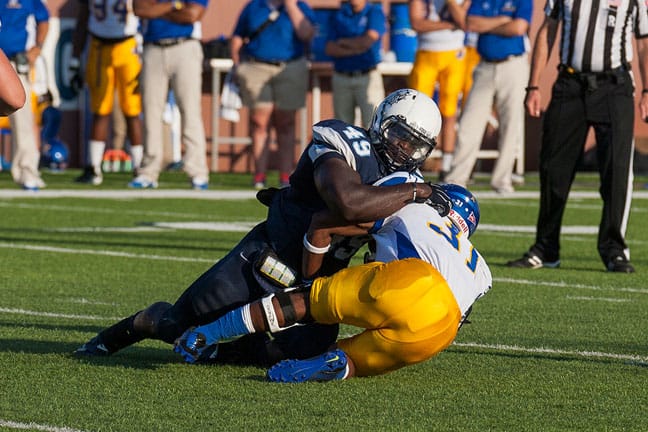 Defensive tackle Devin Benton ended his senior season as one of the most decorated players in Southwestern Oklahoma State University football history. The 5-11, 270-pound senior has enjoyed success at every level of the game. As a high school senior, he earned Texas Class 4A-7 all-area team. When he signed his National Letter of Intent to play for SWOSU four years ago, he expected to have a major impact, and he has accomplished just that while rewriting the record book.

“It means that my hard work and everything was worth it. Everything I did, not going home for the summer, not going home for too many holidays either was all worth it,” said Benton when asked about his exceptional career, “All I wanted was to be one of the best people to come through SWOSU, so me accomplishing that is just great. I’m definitely a little speechless; I didn’t think I would get GAC Defensive Player of the Year.” 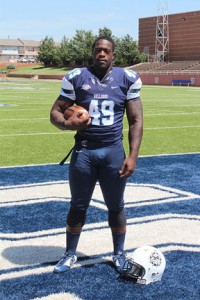 Although he may not have expected to be named the GAC Defensive Player of the Year, there was no one more deserving in the conference. His 23.0 tackles for loss, including 5.5 sacks, this season not only tied the SWOSU record, but also set a new Great American Conference record. His stats also earned him a fourth straight All-GAC honor and a third consecutive selection to the first team.

“I’m definitely going to do my job and that consists of me being disruptive,” said Benton, “As long as I do that and I’m messing up offensive coordinators and making them game plan against me, then I’m doing my job.”

After standout performances in his first three seasons, Benton expected to be a focal point of opposing blocking schemes this season. Despite their best efforts, opposing offensive lines allowed Benton to put up the fifth-most tackles for loss total at the NCAA Division II level this season, while he also collected the fourth-most sacks in the GAC. Even when he wasn’t collecting tackles in the backfield, Benton still made a strong impact in the trenches with a team-high eight quarterback hurries. In addition, he was a force on special teams with two blocked kicks.

Benton’s most impressive game of the year came against Arkansas Tech as he made a living in the Wonder Boys’ backfield. He finished the game with a team-high eight tackles. His five solo tackles were all in the offense’s backfield for 11 yards lost. He also collected one-half sack on a crucial fourth-down attempt at Tech’s own 36 yard line late in the fourth quarter to preserve the 27-23 victory. By collecting 5.0 tackles for loss in the game, Benton tied for the third most tackles for loss in a single game at SWOSU. For his efforts, he was awarded GAC Defensive Player of the Week and Beyond Sports Athlete of the Week honors.

“Devin Benton is a big-time football player. I’ve coached a lot of great football players, including some currently in the NFL, and I think he’s as good as any player I’ve been around,” said SWOSU Head Coach Dan Cocannouer, “He keeps his motor going constantly and our opponents know that when they play us, he’s the guy they’ve got to try and stop. Devin is an unbelievable athlete and it’s fun to watch him play because he keeps stepping up his level of play, which makes the rest of our defense play better.”

Because of his play, Benton was able to free up his teammates to make plays themselves. As a result of the increased attention paid to him, Benton’s partners on the defensive line – Jake Doyle and Collier Ward – were able to record career-high numbers of 9.0 tackles for loss and 4.0 sacks, respectively, this season. This is just the way Benton preferred it.

“I definitely had help from the guys around me,” said Benton, “Once they started making their plays, you have to start accounting for them, too, and it freed me up just enough to get all those goals. It was perfect.”

Benton leaves SWOSU as the career leader in sacks (18.0) and tackles for loss (50.0). He ranks third among active Division II players in tackles for loss after serving as a four-year starter, including 39 consecutive starts along the defensive front. The four-time all-conference honoree is the first Bulldog to pull off the feat since the transition to Division II in 1997 and the first player in GAC history to be placed on the all-conference team each of his four seasons.

National attention is a by-product of consistent excellence, and Benton has been no stranger to the spotlight, earning All-Super Region 3 honors from the Don Hansen Football Committee last year. His efforts from this season have landed Benton nominations for two prestigious awards: the Gene Upshaw Award (presented to Division II’s Top Lineman) and the Cliff Harris Award (Top Small College Defensive Player) and he hopes to become the Bulldogs eighth NCAA All-American and first SWOSU defensive lineman to earn All-American honors since 1996.

Despite exhausting his eligibility at SWOSU, Benton is also looking forward to extending his playing career. He has already committed to play in the National Bowl Game in Miami on Dec. 7 and he’s still assessing his options for other post-season competition in hopes of beginning a career at the professional level.