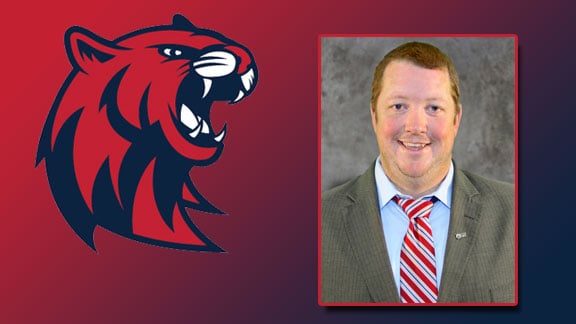 “I am so thankful to Dr. Rice and the entire athletic staff for the opportunity to be the next golf coach at RSU,” Dickinson said. “The Hillcat family has been extremely welcoming, and I can’t wait to get this inaugural NCAA DII season underway.

“I am also extremely grateful to the family at Oklahoma Wesleyan that gave me the opportunity to coach that program. I wish them nothing but the best during the transition.”

Dickinson comes to the Hill from up the road in Bartlesville, Oklahoma where he spent four seasons leading the Oklahoma Wesleyan men’s and women’s golf teams. The men’s program was ranked 123 in the nation, according to Golfstat, upon his arrival before he pushed the team to its current ranking of 22nd. Dickinson also recruited and coached the school’s first NAIA All-American in 2016 and a NCCAA individual national champion during the 2015 campaign.

A season ago, he guided the Eagles’ men to their first-ever appearance in the NAIA national tournament where they placed 16th overall. He led the teams to five tournament victories in his career, including the 2016 KCAC Conference Championship. During his four years at OKWU, he coached 16 all-conference and two all-region selections and was named 2016 KCAC Coach of the Year.

Dickinson helped start the women’s program for the 2013-14 season and over three years had seven all-conference performers, including the KCAC’s Freshman of the Year in 2012 and Newcomer of the Year in 2013. He also led the team to a tournament title in the conference championship and three runner-up finishes in his tenure.

Both Hillcat teams open their fourth season as members of the Heartland Conference Sept. 12-13. The women play in Tahlequah for the 18th Annual NSU Women’s Golf Classic, while the men travel to Amarillo, Texas, for the Ryan Palmer Foundation Invitational.