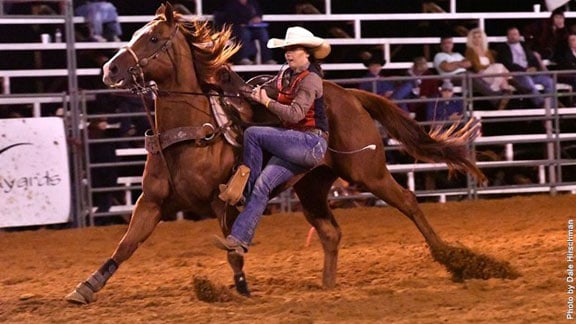 Coverage of the SE Stampede on OSN is built by High Noon Trailer Repair.

Two rodeos into the season and a second team champion title is claimed by the Oklahoma Panhandle State University men’s rodeo team as they continue to demonstrate their excellence in the arena.

Martin combined his long go ride of 62 points with his short round win to position himself second in the average, behind Cole with a total of 136 points on two. Riggins finished fourth in the average with 124 on two scoring 56 points in the long go and 68 in the short round.

He was followed by teammate, Taton, who was 119 on two. Taton earned 63 points in the long round, and 56 in the short to finish fifth in the average. The combined efforts of Cole, Martin, Riggins, and Taton resulted in an astonishing 285 of the 550 overall points for the men’s team.

Following suit, the saddle bronc riders dominated the bucking chutes as well. Australia-native, Jake Finlay, placed second in the long go with a score of 72, and an even better score of 76 in the short round. With a total of 148 on two, Finlay split the average win with Southwestern Oklahoma State University cowboy, Nick Shenold.

Finlay was joined in the short round by freshmen Scott Davis, Sam Martin, and Jade Taton, and junior, Cody Ballard. Davis executed two consistent rides and split fourth and fifth in the average. Martin, Taton, and Ballard, unfortunately fell short of the eight-second whistle in the short go.

Although Ballard experienced some tough luck in the bronc riding, he excelled in the bull riding. Third in the first go with a score of 74 coupled with first in the short round with an 80 point ride, ensured Ballard the average win and bull riding title.

In the team roping, Peyton Holliday and partner Wyatt Muggli from Southeastern Oklahoma State University, posted the fourth fastest time in the long round with a 7.7 second run. The duo finished with a 7.8-second run in the short round placing them second in the average overall. Will and Sam Martin, as well as Luke Meier, and partner Tucker McClain, also qualified for the championship round.

Excited and more determined than ever, the Panhandle State Rodeo Team eagerly awaits the next rodeo at Oklahoma State University, Oct. 20-22.