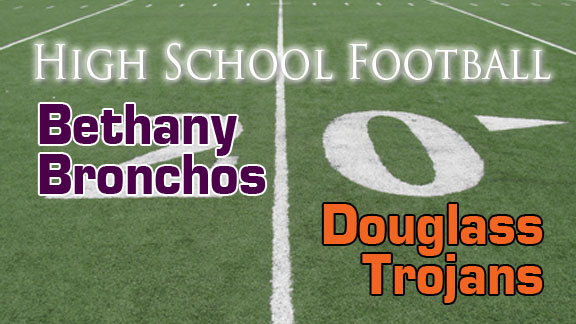 OKLAHOMA CITY – The Douglass win over Bethany on Thursday night was highlighted by the play of Patrick McKaufman on offense, defense and even special teams.

The senior had a bigtime performance for the Trojans as Douglass gave Bethany its first loss of the year in a 22-14 win.

McKaufman was 5-for-9 passing for 148 yards, including touchdown passes of 58 and 54 yards. He also picked off his Bethany counterpart, senior quarterback Bryton Schmitt, late in the fourth quarter as the Bronchos were driving.

McKaufman even blocked a field goal attempt in the first half.

Douglass (5-2 overall, 2-1 in District 3A-2) had a methodical effort throughout the evening on offense and had solid contribution from junior running back Chris Friday.

Friday had 29 carries for 167 yards, including a 50-yard scamper on the Trojans’ opening drive.

Douglass used a nine-play, 80-yard touchdown drive on the that first possession to take an early lead. Junior receiver Treijon Edwards capped the drive with a 4-yard run into the north endzone for the score and Trojans led 7-0.

Bethany’s first possession looked to mirror that of the home team, until Schmitt’s pass was picked off at the goal line, ending the threat. It was the first of three interceptions thrown by Schmitt on the night and one of a number of opportunities for points the Bronchos left on the field.

The Trojans’ second possession was similarly steady. DHS moved the ball 92 yards in 14 plays and extended the lead to 10-0 on a 21-yard field goal by David Arriaga at the start of the second quarter. That was the score at the intermission.

Bethany (6-1, 2-1) opened the second half with an interception on the first play from scrimmage, but the defense held Douglass and got the ball back. Schmitt found Brock Holliday for a 29-yard touchdown pass and looked to be back in the game, 10-7. But it would be the Bronchos’ only offensive score on the night.

McKaufman’s 59-yard touchdown pass to Perry Johnson put the Trojans back on top by two scores, 16-7, following the missed PAT.

Bethany wasn’t done, though. Senior receiver Landon Stout ran back the ensuing kickoff 68 yards to get his team within two at 16-14.

But the McKaufman and crew had just enough left to hold off the rally. On third and two with less than three minutes remaining, McKaufman eluded pursuers in the Douglass backfield for more than 10 seconds before heaving the ball down the field to a wide-open Darrius Hawkins for the game-clinching score.

Schmitt was 10-for-22 passing for 113 yards and a touchdown. He also led the team in rushing with 20 carries for 65 yards. Sophomore running back Payton Harrell had 11 rushes for 54 yards for the Bronchos, as well.

Douglass goes on the road next Friday (Oct. 23) to take on John Marshall, while Bethany will try to rebound from its first loss of the season at Blanchard.