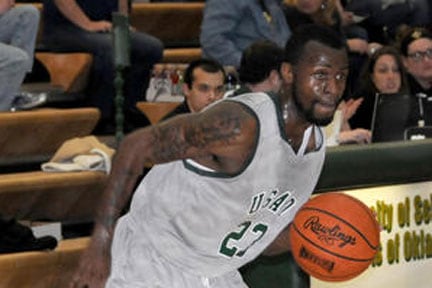 After giving up a couple of early layups, the Drovers (11-6, 4-5) took control of the game with a scoring spree. By halftime, the Drovers had their highest lead of the half — commanding the game 51-18.

In the following 10 minutes, USAO continued to add to their total, leading by as much as 41 with just 12 minutes remaining in the game. Not content, the Cavs fought back to narrow the gap slightly.

Four Drovers scored in the double digits on Saturday. Senior Norris Rumph led the pack with 18 points and six assists.

Brandon Cutler and Phillip Harris — also Drover seniors — each had 14 points. Cutler shot perfectly from the field in the game, making all six of his two-pointers and both his free throw attempts. Harris went 5-for-9 in the game and had five assists.

The final Drover to score in the double digits was Jahseth Lloyd, who had 10 points, six rebounds and three steals.

Kennis White led the Drovers in rebounds with nine.

For the game, the Drovers sank more than 56 percent of their shots from the field, nearly 52 percent from beyond the arc and just over 77 percent from the line.

The Drovers will travel to No. 4 John Brown on Thursday for an 8 p.m. tip off before returning home a week later to battle Oklahoma City at 8 p.m. Feb. 7. That game will be the Drovers’ annual Pink Out Cancer game. Fans of both teams are encouraged to wear pink to raise awareness of the disasters of cancer.