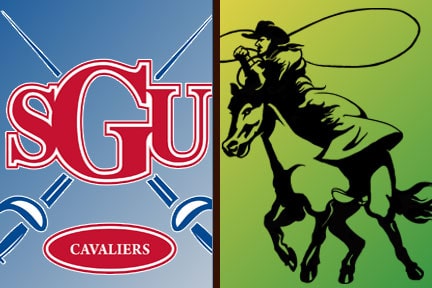 CHICKASHA – Senior Rocio Medrano had a double double on Saturday afternoon, leading the Drovers to an important conference win over the Saint Gregory’s, topping the Cavaliers 63-56.

Medrano sunk seven buckets and went 9-for-10 from the charity stripe in the game on her way to 23 points. She also had 12 rebounds and four assists.

Paige Pulliam and Celeste Smith each had nine points and three assists in the game.

After the Drovers took a quick lead, the game went back and forth for the entire first period, and USAO trailed 29-27 at the half.

But just four minutes into the second half, the Drovers took the lead and, while the game was tied a few times after that, USAO never lost the critical lead.

The Drovers shot more than 34 percent from the field in the game and slightly better —38 percent — from beyond the arc. They had 10 steals as a team.

The win could help propel the Drovers (10-11, 1-8) to turning a rough conference season around.

The Drovers will travel to John Brown on Thursday for a 6 p.m. tip off before returning home a week later to battle Oklahoma City at 6 p.m. Feb. 7. That game will be the Drovers’ annual Pink Out Cancer game. Fans of both teams are encouraged to wear pink to raise awareness of the disasters of cancer.