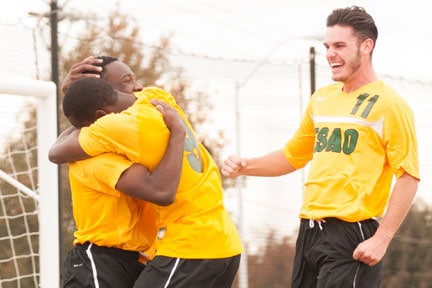 CHICKASHA – After 90 minutes of Thursday’s battle, the Drovers could be seen huddled together singing out cheers in celebration of a Sooner Athletic Conference Championship and another trip to nationals.

The No. 17 University of Science and Arts of Oklahoma (15-4) defeated the Saint Gregory’s Cavaliers 2-0 in the SAC Championship on Thursday afternoon at Drover Pitch. It was USAO’s 11th victory in a row.

The win sends the Drovers to their fifth consecutive NAIA Men’s Soccer National Championship Opening Round, which is set for Nov. 23. The NAIA will release seeding and pairings on Monday.

“I’m proud of our young men. We started out a little bit low this year and I don’t know what it is but we’ve been on a run as of late, keeping clean sheets,” Head Coach Jimmy Hampton said. “It’s nice to be going back to the round of 32. We are very proud of that at USAO.”

It was USAO’s sixth Sooner Athletic Conference Tournament Championship and eighth total conference championship in the program’s history. The Drovers clinched the regular season title on Nov. 5 in a 1-0 win at Northwood.

Additionally, junior goalkeeper Bryan Byars (15-4) set a school record for most wins in a career with 46 total in the wins column. He had three saves in Thursday’s shutout.

The Drovers took the lead just 20 minutes into the game when Perry Sansford scored off a direct pass by Stephen Owusu. It was Sansford’s seventh goal and second game-winner of the season.

Just before halftime, SAC Player of the Year Liam Madden sailed one into the bottom of the goal off a shot from 24 yards out. The Drovers held the Cavaliers at bay for the entire second half to go on and secure the shutout.

SGU keeper Brock Vorwald, NAIA Defensive Player of the Week, had four saves in the game. The Cavs had a great tournament run, taking down the second and third seed on their way to the SAC Championship game.