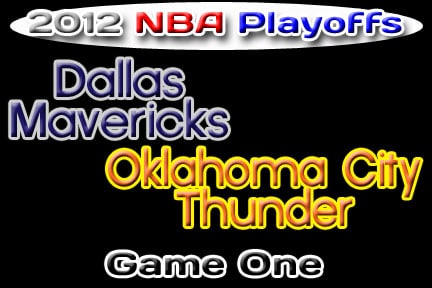 The Thunder proved on Saturday night that lightning can strike twice in the same place.  Kevin Durant hit a last-second jumper to give Oklahoma City a one-point victory, 99-98, over the Dallas Mavericks in Game One of the first round of the Western Conference playoffs.

Back on Dec. 29 with the Thunder trailing the Mavs by two, Durant knocked down a three-pointer at the buzzer in the first matchup between the teams, giving OKC the big win.  The Thunder took three of four from Dallas in the regular season and continued the trend with a playoff victory on Saturday.

The Western Conference’s second seed Thunder was predicted to take down the defending champions handily in the first round matchup.  But no one let the Mavs in on that information.  Dirk Nowitzki and Jason Terry had 25 and 20 points, respectively, as the Mavericks gave the Thunder all they wanted for 48 minutes.  There were 10 ties and 16 lead changes with neither team leading by more than eight.

Russell Westbrook had a game high 28 points and a game high five assists, leading OKC in both scoring and distributing.